My Exploits in the Warrumbungles 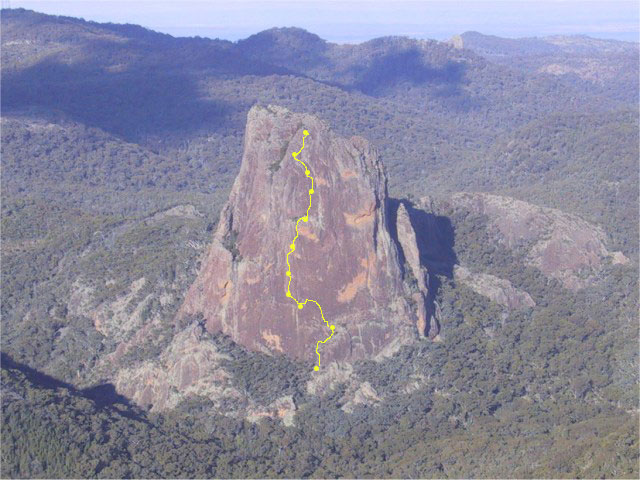 This is Lieben – my first ascent in the Warrumbungles.

I have spent a large amount of time climbing in the Warrumbungles. From 1962 till 1965 I went there about a dozen times. Then from 1969 till 1970 and 1997 till 1999 I went there a few times (but mostly to Bluff Mountain – where I camped beneath the face). So there is a lot I could tell you about. But for the time being I will be brief about all the exploits.
All the routes are described in the various guide books (and my PDF file “The Rock-Climbs of NSW, 1963 – book”(pdf) contains all the early routes). And the photos mostly show the routes perfectly. 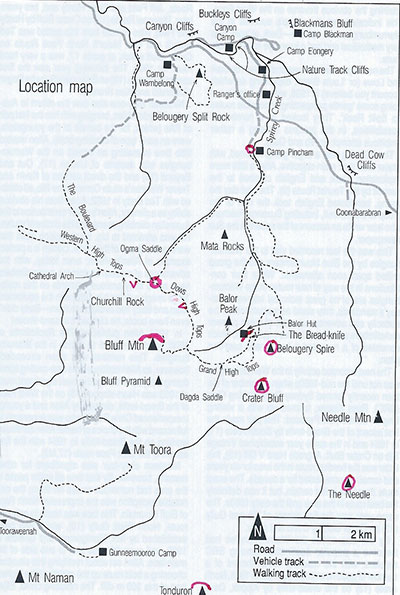 A map of the peaks in the Warrumbungles

My exploits in the Warrumbungles started with a SRC climbing trip over the whole Easter break in 1962. On this one long-weekend, Ted Batty and I made three very significant first ascents. And this was the first time I had seen the Warrumbungles. So we made the first ascent of: the West Face of Crater Bluff (Lieben) on Friday, Cornerstone Rib on Saturday, and Out and Beyond on Sunday.

I will start with West Face of Crater Bluff (Lieben). But first I must introduce you to some very significant history.
Climbing started seriously in NSW, when Russ Kippax and Dave Roots started the Sydney Rock-Climbing Club in 1951. And, over the following decade, these 2 climbers put up some very impressive first ascents. Thus they made the first ascent of: the Face of King George (300 meters long and still very hard), Malaita Point, the Mantle-shelf, Fuddy Duddy and the Boar’s Head. These two people were still the dominant climbers in the NSW when I arrived from the UK in 1962 (but I had been born in Australia). However, at this stage, Kevin Westren and Ted Batty were catching up on Russ and Dave’s abilities.

On this weekend Russ and Dave planned to climb the West Face of Crater Bluff (which would be an important first ascent). There was a very large party there of at least a dozen people (the famous Dot Butler herself stayed with us for one night). We all camped in and around Dows hut, which gave as all a perfect view to this magnificent face and the ascent of the party. (Dows hut has now been taken down.) Everyone was quite excited.
Well, I’m afraid, Ted Batty and I resolved to beat Russ or Dave to the ascent. We were quite open about this telling everyone of our plans. But I’m afraid no one there bothered to tell Russ or Dave of this fact.
We started very early and and we were already three pitches up the face before Russ and Dave arrived. We heard their very angry shouts from below – but we pretended not to hear. The climb was very hard – probably harder than any other climb in NSW at the time. But the emotional situation put us on fire. We arrived at the top at 11. am. The climb was too hard for Russ and Dave and they had to retreat.
It took a while for Russ and Dave to forgive us. But eventually they did and now we all are the best of friends. 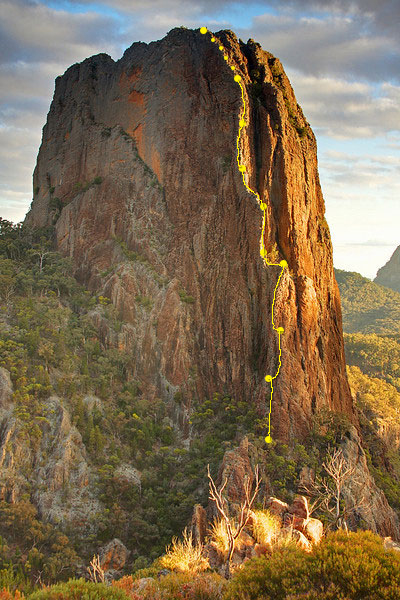 Then on Saturday, Ted and I made the first ascent Cornerstone Ride. (This climb goes up the rib on the left hand edge of this same West Face.) This is a much easier climb. But this climb has rightly become the most popular climb in the Warrumbungles. The photo shows the route.

Then on Sunday Ted and I climbed Out and Beyond on the main face north-east of Belougery Spire. This is also a magnificent climb.
Many people cannot find this climb – which is a shame. And the guide I have of this region does not have any pictures at all of the face. But I have three pictures of this face going from east to north. And each picture shows the same clear overhang at the top.
The left picture comes from my original guide. The middle photo has our route marked on it. The right hand picture is good for seeing how Caucasus Corner and Scunge Gully fit into the whole major face. 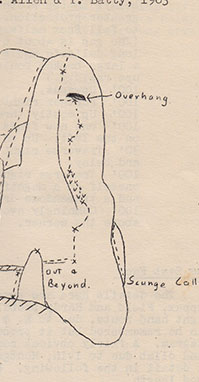 So now you have no excuse not to find this wonderful route. 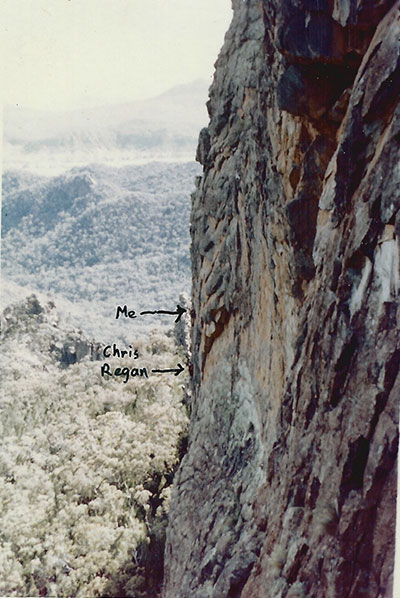 If you study this picture very carefully, you can just see me climbing and Chris belaying on the west face of the Bread-knife.

About a year later, I turned my attention to climbing the major unclimbed features of the Bread-knife. Even then climbing was illegal there. But this never worried me. However, of course, I always made sure that here were no rangers around, nor anyone beneath us who could be hit by falling rocks.
The major item was the west wall, which looked very intimidating. I did this with Chris Reagan.
The feature, which I remember most, was our pitons, which we used heavily in those days. I started with a good rack of about 12 pitons. Then, at the end of this climb, these pitons were all a mangled wreck and they had to be replaced. So this gives you an idea of just how hard the climb was. Thus this was a long climb and demanding climb. We called it – “Heart Stopper”.

Beneath, on the left, I show a picture of the west face of the Bread-knife. It is not very good – but it is the best I could find. From this picture you can just see that Bread-knife dyke continues on as part of the Butter-knife dyke. We climbed this as well and called this – the Minor Route. But the only reason we did this was because we didn’t want other climbers doing it and then claiming that they had made a rival first ascent of this face.
Beneath, on the right, I show both both the Bread-knife and the Butter-knife dykes as as seen from the east. Here the two items appear to be quite different. 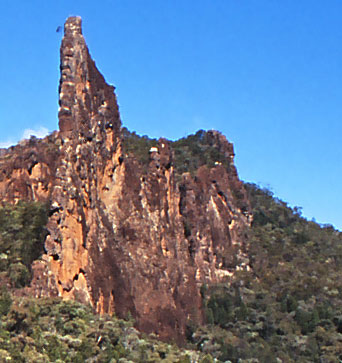 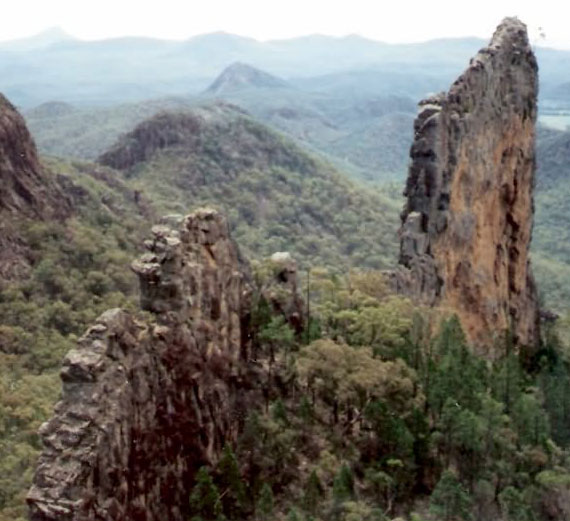 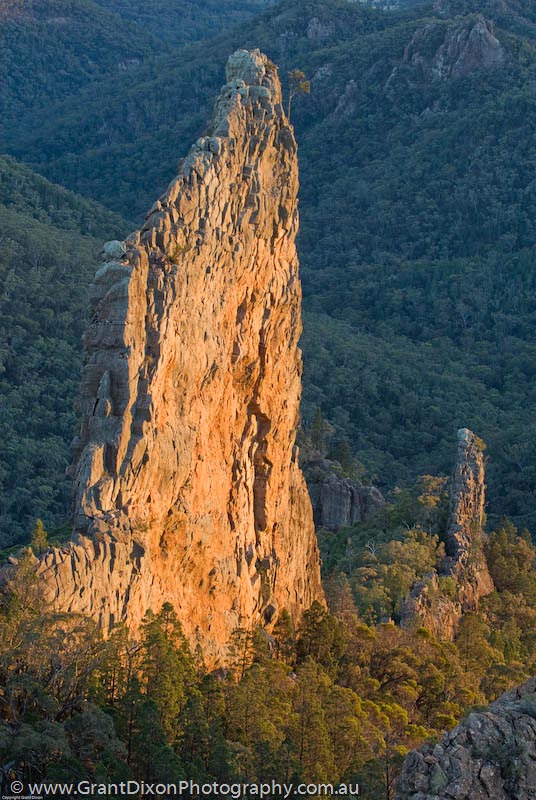 The East Face of the Bread-knife

Finally Ted Batty and I made the first ascent of the East face of the Bread-knife. As you can see, this face is slightly overhanging and technically the route is very hard indeed. But, by this time, I had developed my bolting system. Near the top of the climb I had to hold myself into the face using a head-jam in a slight chimney. Then I could use both hands to drill a hole to put in a bolt.
This climb was more like a modern sport climb. But now (if I could climb again) I would rather repeat the East Face route again – rather than repeat Heart Stopper again. Modern climbs are so much safer than the old adventure climbs we used to do. And I have no desire for us all to return to those dangerous days of old. 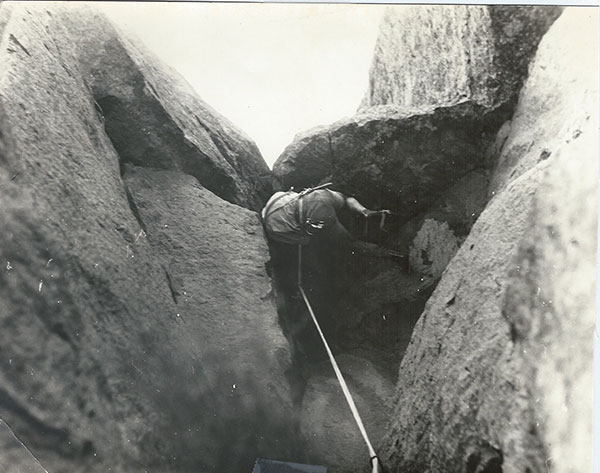 This photo shows me aiding up an overhang at the top of “Northern Grooves”.

I have also spent quite a long time in the Tonduron area. I like the camping there and the general scene. A group of us from Sydney Uni once camped there for 5 days and climbed on both Tonduron and Naman. (The rock in awful at Naman – but the Wallaroos are fantastic.) We did several climbs on Tonduron but none are really worth and going all that way. Northern Grooves (shown in the picture) was the hardest of these.

(But a later direct ascent up the centre of the main north face of Tonduron by a Victorian party should be very good indeed.) 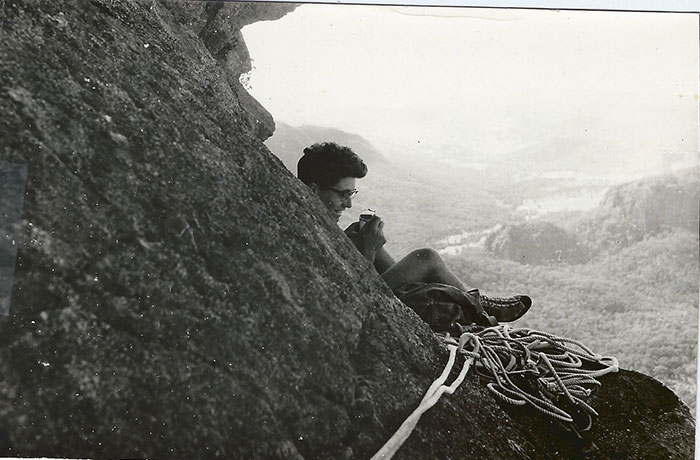 Me, resting and eating, at the top of Northern Grooves. 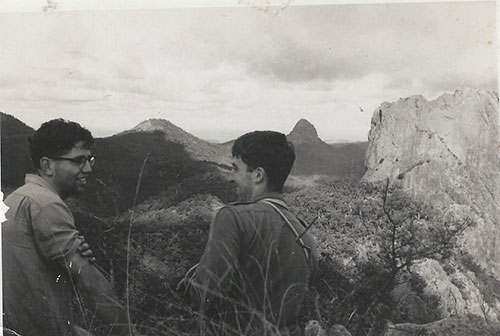 Jack Pettigrew and I once did the five climbing pinnacles in the Warrumbungles in one day (when we were camping beneath Tonduron). So we started at dawn and climbed Crater Bluff first. Then it was easy to ascend the Bread-knife and Belougeries Spire from here. But then it a hell of a long walk to climb the Needle. Finally Tonduron was still a long way. We climbed this as it was getting dark.

Later John Ewbank and I did three new routes on Bluff Mountain. This is all described in my webpage the “First Ascent of the Face of Bluff Mountain”.

The major peaks in the Warrumbungles

My next normal webpage is the“Original Climbing Guide to NSW”.