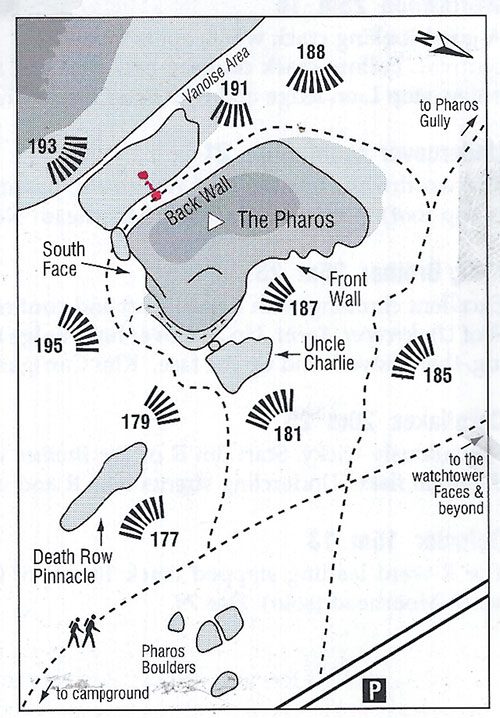 The red marks show my short fall. I fell from the grey area (scrambling rocks)down to the track below.

After the summer of 1999/2000 I had intended to stop serious climbing (because it was absorbing too much of my thinking time). However, as events turned out I found I had no choice in the matter.
Over the past year I had scored quite a few good “on-sight” 23 grade climbs and, so to finish my climbing career, I thought it would be nice to score one good grade 24 “on-sight” climb. (I had actually scored a couple of 24-grade climbs before this – but I didn’t think that these climbs were grade 24).
In November of 1999, the club (the SRC) had a large gathering of climbers camping at Arapiles in Victoria (definitely the most popular climbing area in Australia). I was staying there for two weeks. Reynold and I were planning to try the climb “Orestes” as a good classic 24-grade climb. On the first week I did many easier climbs – the weather was rather wet. The very last climb of my life was destined to be “Auto da Fe” a superb 21-grade climb, which I did with Penny Leicester. This is a magnificent climb to finish my climbing life. 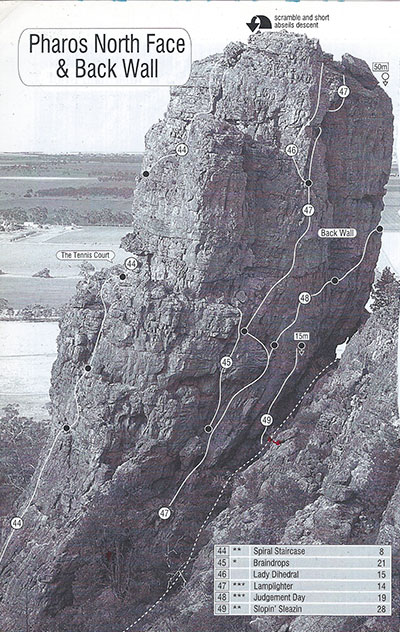 This is a photo of the area. If you look very carefully, you can see my red marks, (just below route “49”).

On the next wettish day, Chris Jackson and I went out to try a 19-grade climb on the back of the Pharos (which was well over-hung and so mostly dry). We scrambled up the other side to see if the crux was likely to be wet. However the rock here, although easily angled, was wet and I slipped. Not a big fall – about 4m but I was unlucky in the way I fell – a small ledge tossed me backwards and then I landed flat on my back on a sharp rock. I was out for an hour but even as I became conscious and was being carried off, it was clear that my back was probably broken. One of the first people to reach me was Jon Leicester – a close friend and a doctor. So I was well looked after.
The rescue and medical system worked well. I was helicoptered to Melbourne and my back was all screwed of with bits of metal (for the technically minded the break was T9 and very complete). After four weeks, I was flown back to Sydney and completed my recuperation first at the “Prince of Wales” and then at “Prince Henry” hospitals (I vastly prefer the more open system that seems to operate in NSW rather than Victoria). The photo shows me with patients on one of the outings they organise.

After a while life becomes too easy in Hospital (every-thing is done for you) – so you have to move out. But then, for a while, life becomes a real trial. Life as a paraplegic isn’t all that bad when you can organise yourself – but the process of organising oneself is terribly difficult. {Thus the task of putting lights in the right place can be surprisingly hard.} Thus you desperately wish that some of the excessive amount of help, which you received in hospital, could be used in helping to set yourself up when you move out – but this is not the way our current hospital system works. In my case I had to spend a year at a half-way house at Berala, while I organised myself for somewhere to live (my flat in Stanmore wasn’t wheel-chair accessible). This year tended to be a black period of my life – but of course, as you might expect, my “Supreme Justice of God” law did chip in (see my “Society of Choice – book”(pdf) section 1.7). Eventually there are benefits. 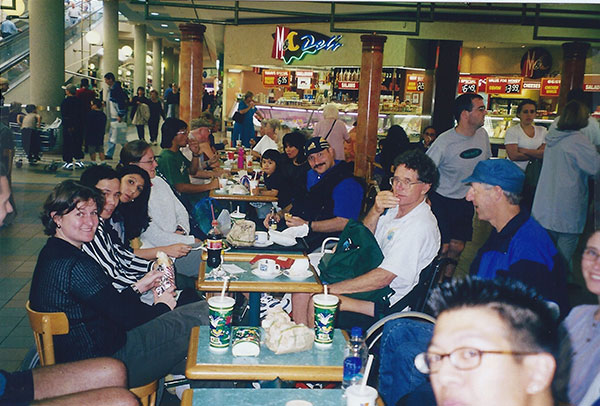 This a photo of my “rehab group” on a day out from Prince Henry hospital.
(I am in the white shirt on the right.)

My next normal webpage is “A Time of Suffering”.