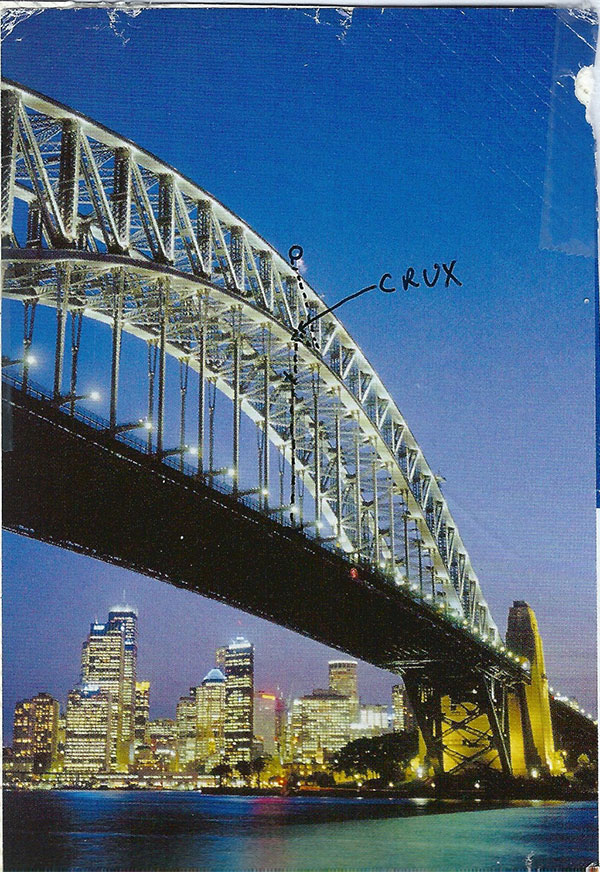 It is really hard to get a photo of our route, which shows the details of the route. This is one view. There is a better view at the end of this webpage.

In the period in which I was most active (the early 60s), lots of people climbed the bridge illegally. Bushwalkers in particular climbed it very often. What people did was to go up to the locked door, step over the rails then grab hold of one of the spikes, swing around the spikes, go back over the rails and then walk up the stair case. This was still a much safer operation than many of the activities that bushwalkers regularly engage in.
So, if I was to keep the reputation of genuine climbers higher than mere-smear bushwalkers, I had to do something very different. My solution was to do a direction ascent going straight up one of the central support pillars (as shown in the photo). But at this stage, I had no idea whether this was at all possible.

I think one night I was drinking in the “Hero of Waterloo” and I mentioned this possibility to Peter Draffyn (our climbing club always drank here every Tuesday night). So off we went to see if such an ascent was in fact possible. 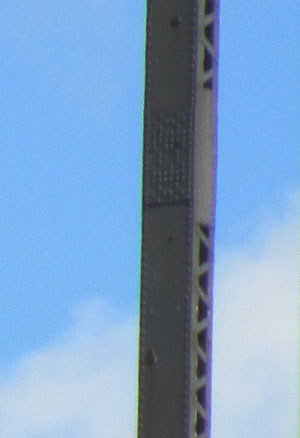 This photo shows the form of the pillars. You can see the struts, which we had to squeeze through, and also the side plates.

Now the shape of the support pillars is that they had a rectangular form going upwards. And this rectangular form is made by two long vertical flat plates joined by crossing struts. There would be plenty of room for a person to get inside these pillars. It would be very hard to climb the pillars on the outside because every few meters there are longish side plates instead of the crossing struts. Besides we would be very visible to all the cars crossing the bridge. But, on-the-other-hand, if we could squeeze between the struts, then the climbing would be much easier and we would be completely hidden as well. At this stage we had walked up the cycle track rather than walking track, which was next to the the railways. I quickly crossed the railway and found that I could slip between the struts. So the climb was on and Peter Draffyn would be my partner. (Of course we had no gear with us at this stage because we were just checking things out after drinking.)

A nice aspect of this climb was that we could start reasonably early. I think we did the climb a week later after a shorter drinking session. We probably started the climb at about 10 p.m. (Normally we did these building climbs during the weekend because we needed a day to recover. But this wasn’t necessary in this case.)
I crossed the rails and slipped between the struts while Peter waited with the gear on the cycle-path. Then he came over and handed me the gear through the struts. I moved down and Peter came in as well (but not so easily because he was bigger than me). Now we were completely hidden and couldn’t be caught. 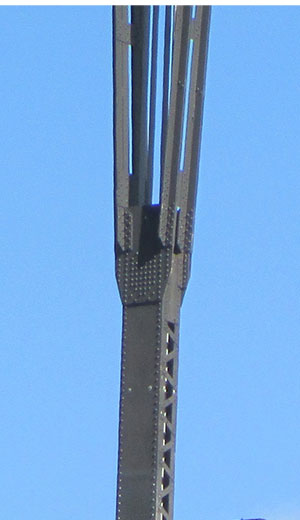 This photo shows the top of the pillar as it forms the 4 corner angles.

The climbing inside the pillar was easy and we could use the struts to put on as many runners as we liked. The situation was rather like caving and it was great fun. But it was a long way – so it took us several pitches before we reached the top of the regular pillar.
About 10 meters before the arch, the pillar ends, and then, from the corners of the pillar, four strong angle-iron supports continue on up to the arch. They separate as they move up. Presumably this is so that the force of the pillar will be more evenly distributed onto the arch. The hard climbing would clearly start here because the flat roof of the arch itself was now above us. So we made a good belay and made ourselves comfortable. I would lead on up from here.
The two outer angle-iron supports stay reasonably close together and so I could bridge between them and I slowly reached the arch. But this was now real climbing and there was a huge drop beneath me. I tied a couple of slings around the angle-iron supports for runners. When I reached the arch I tied on a particularly strong sling. I now faced the really hard move.
From this point, there was still at least a meter of horizontal metal arch before the edge of the arch. So what I needed to do was to reach out, grab the edge with both hands, swing and then mantelshelf onto the ledge above it. I first reached out with one hand and checked I could actually reach the edge. I then came back a little and called out and told Peter about the coming problem and how I might fall.
So now it was up to me to make the big move. The exposure was absolutely awesome – a hundred meters or so to the bridge below – and then a further hundred meters or so to the water. 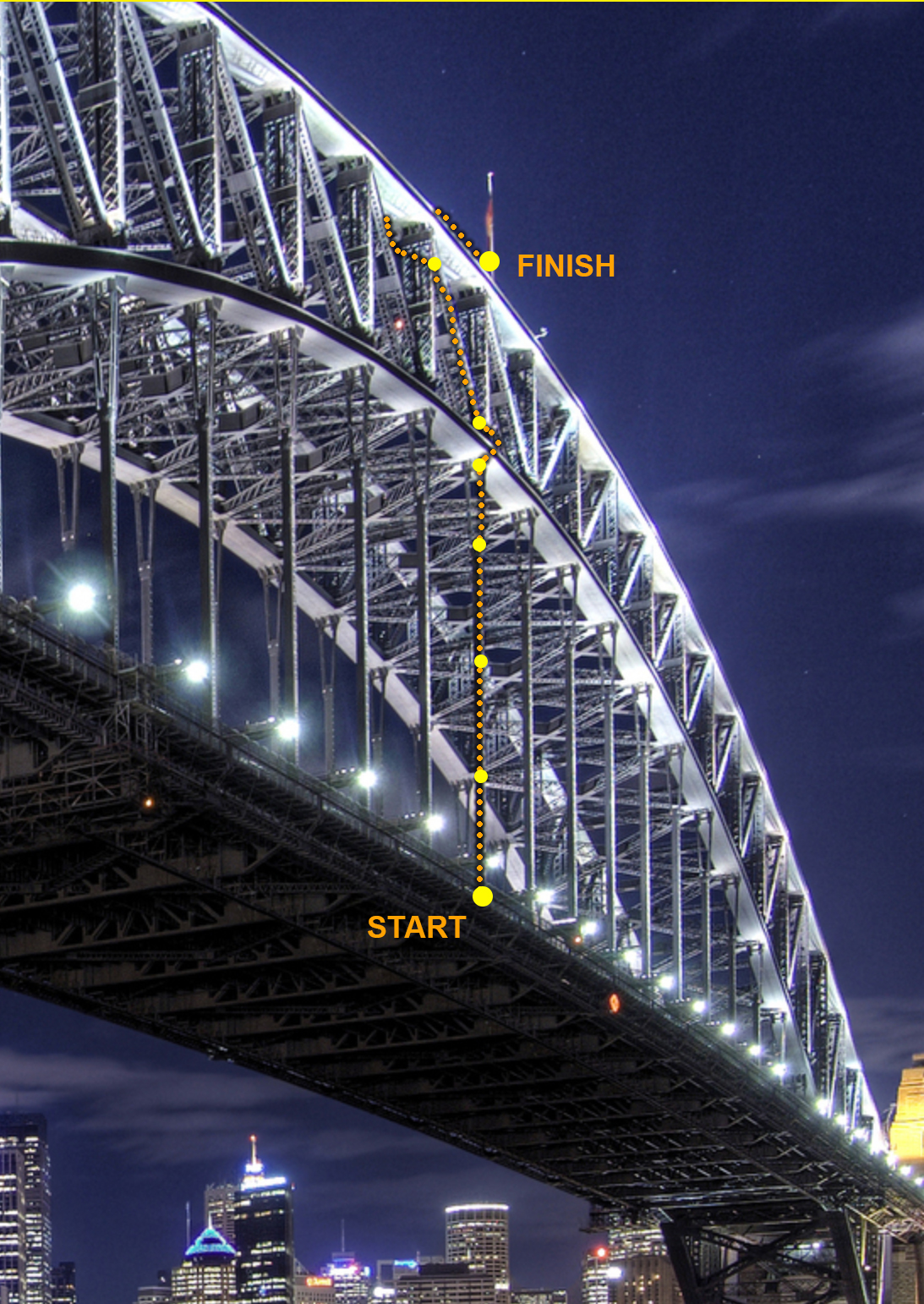 This is the best view of our route. You can see the swing move at the top. 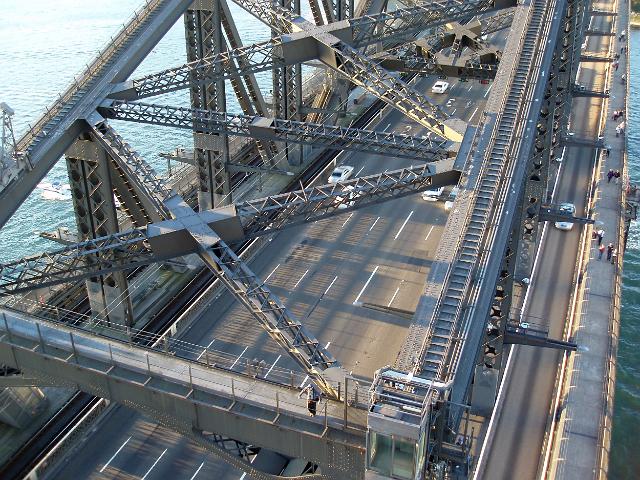 This picture shows the nature of the road lanes and rail-way lines. So we started on the left from the cycle way.

This was going to be a very committing move. If I couldn’t make the mantle-shelf then I would fall and plunge quite a few meters into open air. I had never had a fall like that before. But I had to try it. So it was – first one hand to the ledge, then two hands and, as I did this, my legs swung out automatically free beneath me. And then it was up to my good old arms to pull me up over the ledge. And they just managed it. The rivet knobs helped a bit because they gave me some purchase for my hands. But I still had to use every ounce of strength that I had.
But the move wasn’t over yet. The arch is like a gigantic girder. So now I was on a 30 cm ledge with the top part of the girder still 2 meters above me. I stood up and then I could just reach the top edge of the girder. So now I had to mantelshelf over this edge as well. But this move was easier because my feet could now give my arms some help by using some of the rivet knobs as foot holds. I was soon up and there I could make a good belay on the many girders behind me. It was Peter’s turn then. I could rest and enjoy the incredible view all over the harbour and city. And of course I was feeling exceedingly pleased with myself as well.
Peter finally came on up and was most impressed at the dramatic move and the tremendous exposure.
From there the climb is easy but it is still someway to the top of the second girder arch. We left one rope behind so that we could use this rope to help us retreat. So we just climbed with one rope and even that was hardly necessary. One just follows the various cross girders structures to the top. There is a metal flag pole at the top but we weren’t going to try to climb that this time.
The abseil was OK – but it was essential that we had the second rope ready to pull us in back onto the angle-iron support. Then the descent down inside the pillars is quite slow because one has to down-climb – there is no room to abseil.

So we had successfully made a direct illegal first-ascent of the Sydney Harbour Bridge. 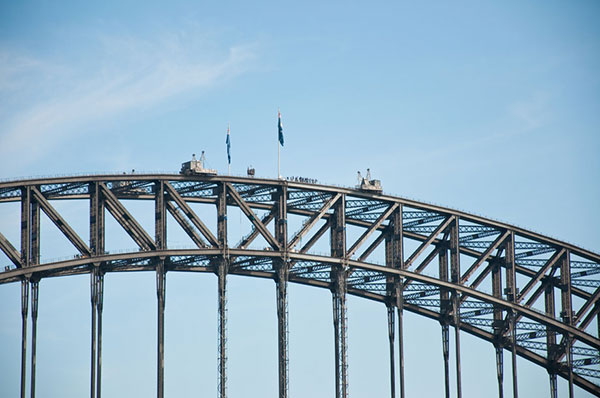 This photo shows the nature of the Bridge on top.

Because this climb is so dramatic and safe, I was happy to do it many time. So Jack Pettigrew agreed to make a second ascent with me. This ascent also went well. This time I tried to have a go at climbing the steel flag pole at the top. But I had to stop for an embarrassing sexual reason. I can say no more on this very delicate subject.
Jack was a much more entertaining companion because he can relate all the various incidents in much better dramatic form. This climb was thus more fun. I recommend the climb to all climbers.

My next normal webpage is “Illegal Ascent of the Land’s Department + Clock-Tower”.