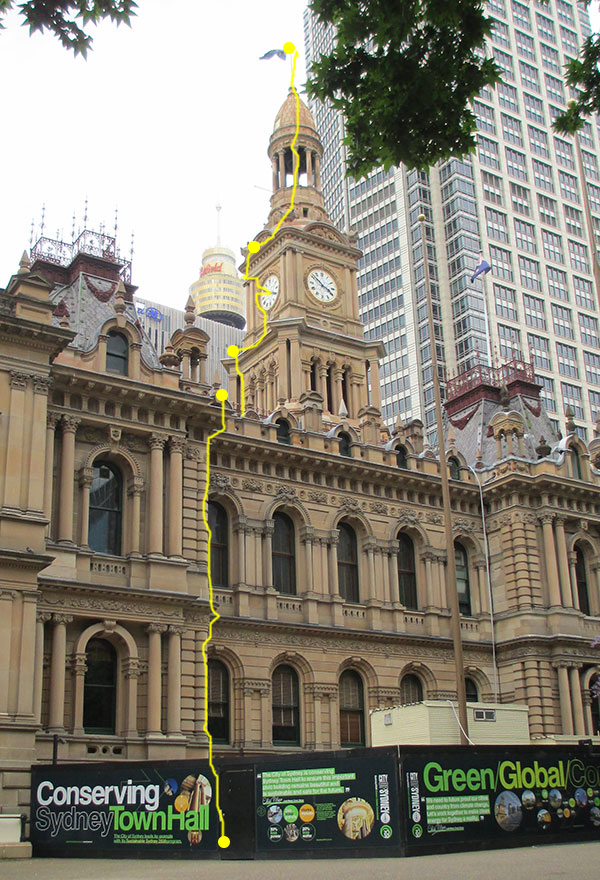 This picture shows the whole route where it actually took place. But parts of the route are hidden in this picture.

For most people the Town Hall would be the best iconic building to try first. Thus all the climbing moves are reasonable and mostly well protected. Also the climb gives a lot of variety in its various moves and situations. But, best of all, it is superb climb to brag about. After all everyone knows the town hall and its clocktower. This is the standard place where people meet to go for a date. So, if you want impress you friend (or friends), you simply show then your intrepid adventure here. You can brag about this climb for the rest of your life.
I did this climb with John Davis a month or so after us doing the Central Railway ascent together.
We had to start the climb very late because there were so many people around. It was well after midnight before we could get started. 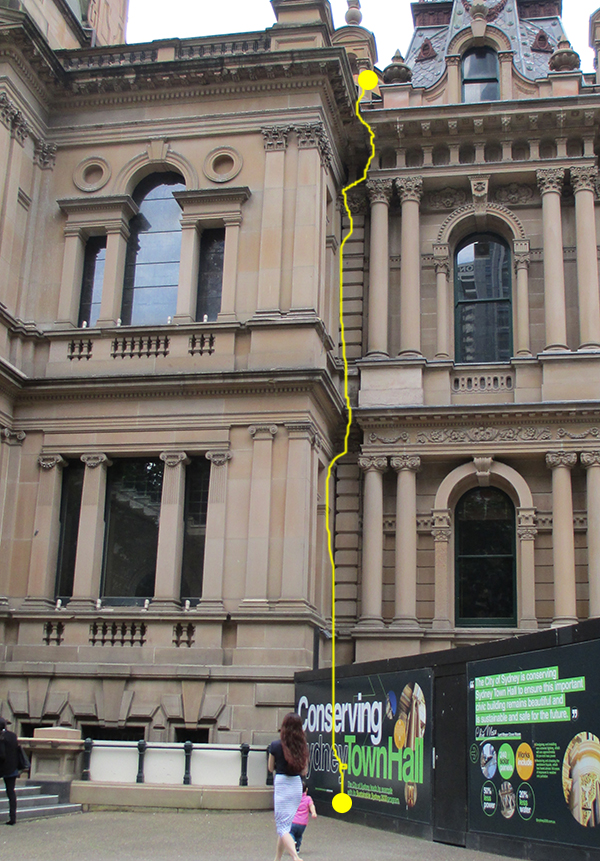 This photo shows our route up the building.

We needed to get quickly up the main building during the times when no one was around or coming. One of us waited in George St to check that no one was coming.Then they could quickly run over to the climb. And we climbed the building very quickly as shown in the photo.
The first pitch onto the building was quite easy – John lead this. The pitch was easy because it went up in a corner and a climber can straddle the corner using small holds between the sandstone blocks. Also there is a crack in the corner that would take large cams but unfortunately this was many years before the advent of cams. But best of all, when the climber reaches the large lintel at the top, they can bridge on both sides of the overhang. So the mantelshelf move up can be done in balance.
From there we had to clamber over and around all the various paraphernalia that always tend to clutter up the tops of buildings. And then we made our way to the backside of the clock-tower where the real climb was to begin. Now it was my lead and there were some very clear difficult problems ahead. 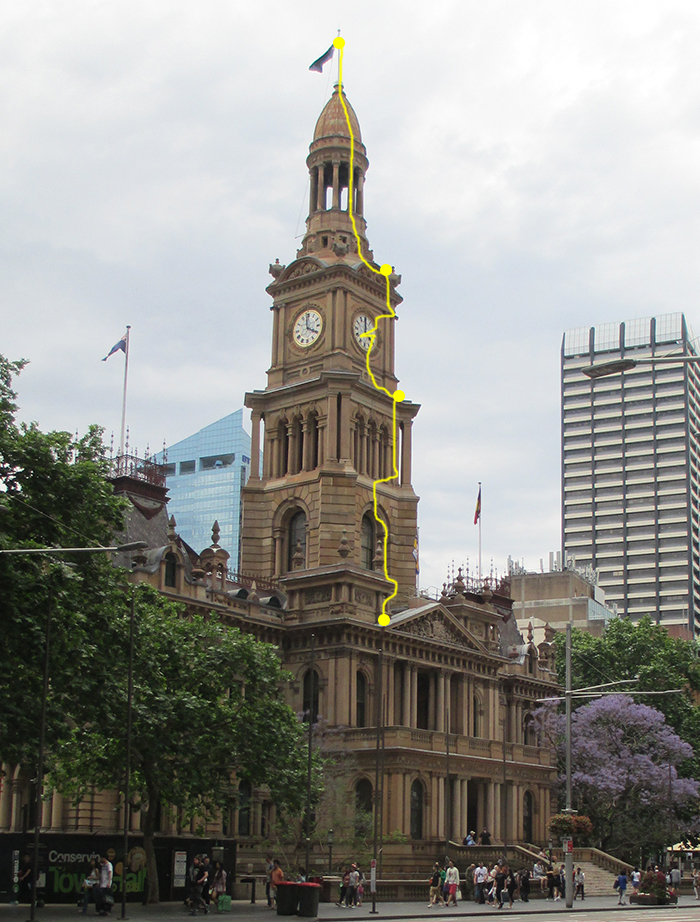 This picture shows our route up the tower. But naturally we climbed at the back rather the front, where we wouldn’t be seen.

In the 60s, when gear was not so good, we tended to climb in shorter pitches. So we actually took three pitches to climb the clocktower. These days people would climb it in one. The four faces of the clocktower are all more-or-less the same. We naturally climbed on the back face because then there would less chance of us being seen. (But even this is problematical. If I climbed on the back face, then I would be very easily seen from York St, because I would be silhouetted against the sky. But then people should be concentrating on their driving. In fact no one did bother to look up.)

The first pitch first went up the series of sandstone blocks (as shown). This part was relatively straight forward, except there was no protection at all. But, at that height, I wouldn’t suffer any serious injury from a fall. From there, I moved slightly right next to the first pillar (I think I put a runner around the this pillar). Then pleasant exciting climbing leads to the ledge above.

At this point I felt we needed a good belay. So I put a bolt on the ledge (I had taken my bolting gear with me). This of course made a hell of a row. But the people in the cars on York street wouldn’t hear this because they were in cars. But I moved slightly left so that the people in the square couldn’t see or hear me. John joined me without any difficulty.

This pitch was now the really exciting part because the route would have to go around the clock itself. I moved back right to be directly beneath the clock on the back of the tower. On the outside of the clock, there is a series of sandstone ornamentations and these give a climber some good hand-holds and foot-holds. So using these, I could move up and slightly left and then I could touch the clock hands themselves. The actual time was now crucial. It was half-past-two in the morning. The axle of the clock itself would make a superb runner. Admittedly, if I had a fall, I could pull the clock mechanism out of alignment. But I wasn’t going to worry about that possibility. So, with a big stretch, I put a good sling runner on this central axle. But the big hand was moving slowly around and, if John took too long, then this runner could get snarled up in the big hand of the clock. I had to, either wait twenty minutes, or trust we wouldn’t take too long. I decided to just climb quickly.
I put the runner on and moved up using the ornamentation. But then the climb got really hard and there was a further lintel move above me to surmount. I wanted another runner before attempting this. On the outside corner edge, there was a column and, at the top of this, there was one of the scroll devices which the Romans and Greeks used to ornament the tops of their pillars many centuries ago – clearly these old ancients really knew what they were doing. By looping a sling in the right manner, I could tie on to this scroll and make it into a reasonable runner. And using this, I didn’t mind making the final airy mantelshelf move over the lintel. The move was difficult but I could do it. It was just rather scary.

On the top of this corner, there was one of these ornamental vase type things. You can easily see them from the street yourself. I could sit behind this and so I was reasonably well hidden. Also I used the vase object to belay on. So now it was John’s turn to climb. But I had to tell him to climb quickly otherwise my runner on the clock axle would get properly snarled up in the big hand. John again came up without too much difficulty.
The final pitch to the flagpole at the top was still real climbing and quite exciting. But at least now there were plenty of runners. John led this pitch and his extra height was quite beneficial for this pitch. We left a pair of old standard “Volley OC Dunlop sand-shoes” tied to the top of the flag pole as our symbol for the world to see that we had made this magnificent illegal ascent.

We then abseiled off. We used one of the pillars at the top of the tower to abseil from first. But abseiling off the building was wasn’t so easy. I think we had to leave a sling and carabiner behind. We were actually seen by a couple of people abseiling down. But they didn’t do anything. So that was OK.

All night-time illegal ascents are terrific adventures. But, for an ordinary climber, this ascent is probably the best. Please think of having a go at doing it.

Below I show two of the pictures I used originally. 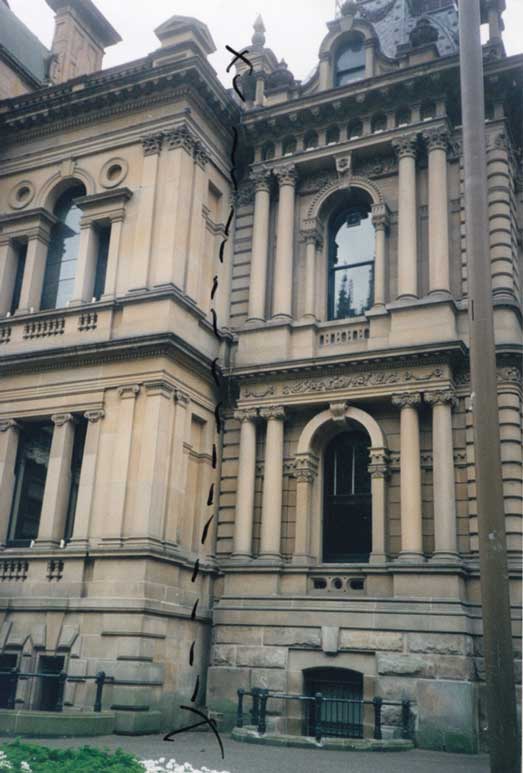 Our route up the building