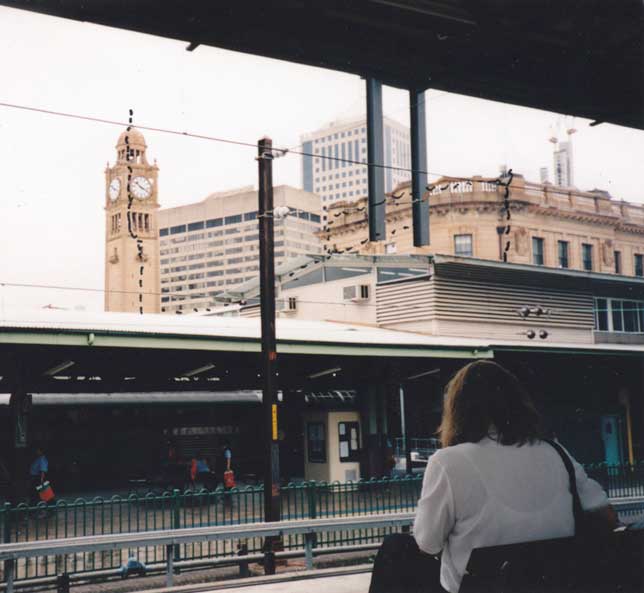 It is really hard to get a photo that includes the clocktower and the building climb together. This is the best I could do.

This was my first building climb in Australia. I did the climb with John Davis. At that stage he was relatively new to climbing and had no building climbing experience at all. But he was very keen and soon became very good. 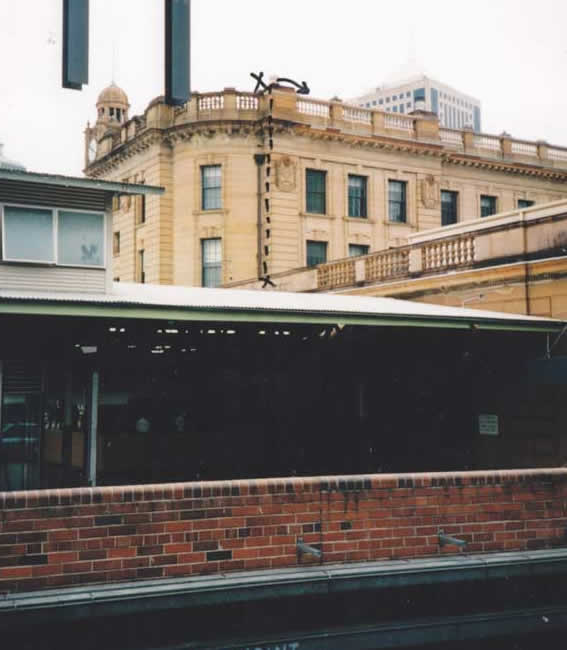 This photo shows our route up the building.

Usually it takes a reasonable amount of time to work out how to get onto the building where the clock-tower resides. In the case of the central railway, this was remarkablely difficult because the central railway building is very extensive indeed. We found the best route was on the far south-easten corner because this was more secluded than anywhere else. (The building has since been extended so access to this corner is now much more difficult.) John was keen to lead this and I was very happy to let him – a fall from the lintel at the top of the building would be very unpleasant indeed. John was tall and strong and lead this pitch very easily. The two photographs show this corner. 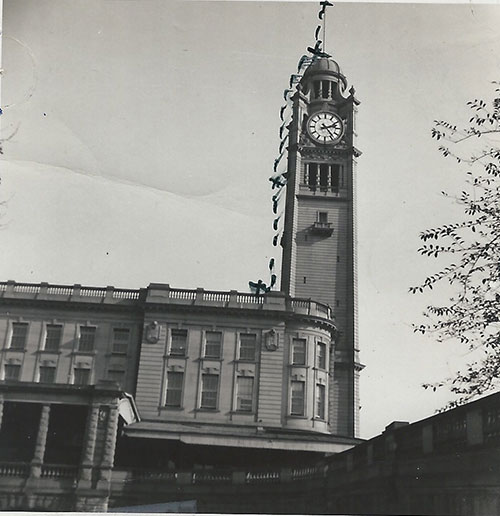 Our route up the clocktower itself

From this point it is quite a long way to the clock-town. So we needed to coil the rope and start again at the bottom of the clock-tower. This was to be my pitch. (I had far more of building climbing than John. Back in London at UCL our club had a little guide book to the climbs that had been put up on the university building. There was 14 in all – I repeated them all and put up 4 more climbs myself. So I had done a lot of building climbing before.)
This pitch was straightforward if a little scary. Their were tiny ledges between the sandstone blocks which were just adequate as hand and foot holds. But no protection at all. About 3/4 of the way up there was a little platform which could be used as a good runner. This meant the final move over the slight overhang, before the pillars and entrance, could be done in relative safety. John came up to here without difficulty. From here we went inside and followed the stairs that led up past the clock to some more open pillars (as shown in the photos). We then had a final pitch that went up over the dome then up the flag pole. At the top of the flag pole we left a pare of old volley-oc sandshoes as a very public sign of our ascent. We were naturally very exilarated at the complete success of this our first ascent.

We abseiled off without any problems. 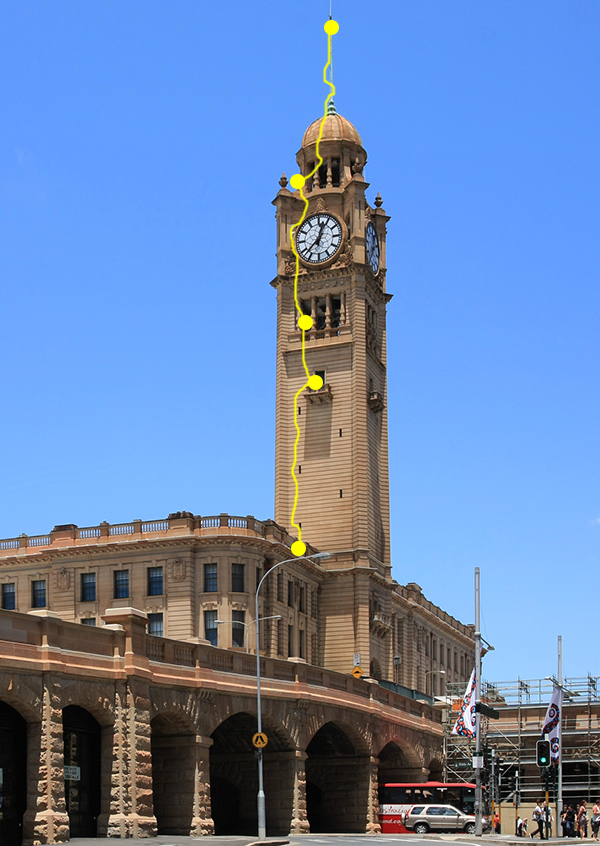 This is a better picture of our route up the tower.

After our first ascent, this clock-tower was done by another climbing party. And this party was caught. What happened was that, when we abseiled off the clock-tower, we naturally pulled our rope down. And our rope made a noise as it clattered onto the roof. Unfortunately railway officials, in an office below the clock-tower, heard this noise. For our party, the officials did nothing because they didn’t know the cause of the sound.
But after our ascent, the officials saw the old sand-shoes, which we left tied to the top of the flag-pole (as a signal of our ascent). So, when the officials heard the same sound of a rope clattering on their roof for a second time, they understood the cause. So the next climbing party was caught.

I was lucky – I never got caught during any of my building exploits. Most of my climbing partners finally did get caught and were grilled in a police station for the rest of the night. I never had to suffer this extreme indignity. (When my brother got caught putting a policeman’s helmet on Big Ben, my parent’s were rung up and they were informed that my brother had been put in a lunatic asylum. I am told that the policemen make these interviews extremely unpleasant.)

My next normal webpage is “Illegal Ascent of Sydney Town Hall + Clock-Tower”.