Four Deaths on the Crags

Climbing now is relatively safe. But it didn’t used to be quite as safe as it is now. I thought it might be useful for me to describe the 4 fatal accidents, which I have been associated with.
These accidents were:

The Death of Paul Griffiths in the Wolgan in 1962

Paul’s fatal fall was on the cliffs you can see at the top of this photo.

On this day, Ted Batty and I happened to be climbing on a different crag from the rest of the crowd in the Wolgan (putting up a minor new route). I think this was my first trip to the Wolgan. We then saw a crowd of climbers carrying a stretcher back to the cars. We immediately abseiled off our climb to try to help.
However we couldn’t help much – Paul was just very dead. We could see his two feet dangling at the end of the stretcher, broken off completely at the ankles – the bones showing. This was my first sight of death – it was awful.
Paul had had a serious leading fall and he had landed on a sloping ledge. But then his waist-line had come undone as well. So then he fell all the way to the bottom of the cliff.
There was nothing much anyone could do to help.

The Death of Dave Davis (an American climber) at Narrow neck in 1964.

This is the current guide’s description of the climb.

This was the death, with which I had the most responsibility.
For me the experience started with a sound, which I have come to really dread. This is the sound of gear jangling as a running person enters a campsite. This person is running because they have come to summon aid to give help for a bad accident – so their gear is gangling. The people at our campsite had just finished for the day and we were ready now to go back to the comforts of home. But an accident ordeal was about to begin for all us people instead. The suspense of this situation was awful.
In this case, us relaxed people were gathered in the lower Pysncave. The news was that Dave Davis had had a bad accident on “Deshabille Detour”. We all hastened to give help. When we got to the bottom of the ladders, I asked if anyone had gone for medical help yet. And no one had. So I thought I should leave the party and seek for help at the nearest house in Katoomba above us. I did this as quickly as possible. But the aid body said they would have to come to us via the roads below us in the valley. This would take at least half-an-hour.
So I then returned back down the ladders to help at the accident scene, as well as I could.

They had left a rope dangling below “100’ Slab” so, using this, I scrambled up to the half-way ledge to where Dave had fallen (and everyone had gathered). To me he looked very dead – the whole of the back of his head had been bashed-in, when it had hit a rock on landing on the ledge. Of course he had no pulse. He hadn’t died immediately because he was still visibly breathing for ten minutes (when I wasn’t there). But now he looked and felt very dead.
I thought we should get the body off the cliff immediately because it was getting late and medical and rescue party would take a long time to get there. At that stage I was the president of the club and the most experienced climber there. But then someone said that that no one should move a body unless a medical doctor has seen the body. I didn’t know if this was true or not. But I thought the sensible action was to get the body off the cliff as soon as possible. But we would try to disturb the body as little as possible – after all – this is what people would do even if the body was alive. So I started by wrapping the body up in a makeshift stretcher and then a few people helped me. We had mostly got the body off the ledge and down to the ground, when the medical and official rescue party arrived. It was certainly a huge relief to let the professionals all take over. The rest of the party assured the rescue party that a doctor had come along the ledge and seen the body before the body was moved. I denied any knowledge of such a visit (but I wasn’t there for the first 20 minutes). Later I checked out if such a doctor visit was possible along the halfway-ledge. It definitely wasn’t.
The subject of the doctor visit was brought up at the inquest – which I of course attended. The coroner was extremely good about the subject. He mentioned the described visit – but showed no in interest at all as to whether the visit occurred or not. He gave me the impression that such incidents are often fabricated. And such incidents are best simply forgotten.
It is a peculiarity of us humans that, in abnormal circumstances, we often prefer to lie – rather than tell the truth. And I know that I myself, when something goes wrong, oftenI initially want to invent a bit of fiction – rather than tell the truth. It is only when I go over a subject carefully to myself that I realise that it is always much safer to tell the full truth. And the full truth is never all that bad. But I am afraid many people often do not tell the truth when accidents occur. This has happened several times in the accidents I have been involved with.

The Death of an English climber on the climb Munich, Tryfan, North Wales 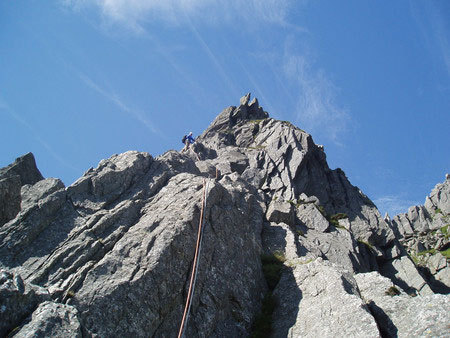 A photo of Munich

I only had a brief involvement in this accident. My partner and I were climbing just around the corner – but even then we didn’t see the accident. We only started helping when the stretcher arrived to take the injured climber off. The semi-professional first-aid/rescue group, associated with the national park service, ran this whole rescue. It was an incredibly efficient rescue.
When the stretcher arrived there was a group of about 50 keen climbers ready to help carrying the stretcher. And we all did. The guy in the stretcher was taken down to the waiting ambulance in the valley at running speed. So, when some stretcher-bearer tripped up, this person would drop out and then their position was immediately taken by another running climber. We all helped carry this stretcher at this running speed for perhaps 50m, while we could. It was an incredible fast operation.
But unfortunately the guy was still dead before they could get him to the hospital.
27 years later, I climbed “Munich” myself to see what the climb was like. (Munich is one of the North Wales classic climbs.) Munich is a terrific climb. But unfortunately the first pitch has a long run-out section with little protection. If you fall at the wrong point on this pitch, then the result could be fatal. Presumably this is what happened to this guy.

The Death of a Canberra guy at Booroomba rocks soloing on Hermes (1971?) 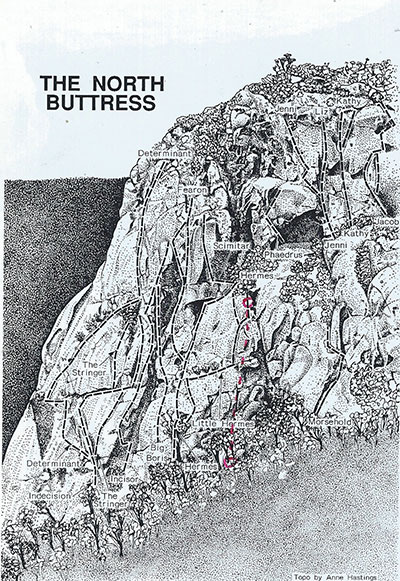 This is a diagram from the current Booroomba guide. If you look carefully you can see my red pen marks showing where he fell from and to.

My involvement in this accident began in the usual way. A group us climbers were having a leisurely lunch, with a cup of tea, at the great fire-site at the top of Booroomba rocks. Then that horrible dreaded sound was heard – the sound of gear jangling. And, sure enough a few moments later, a running climber appeared out of the bushes ready to give us some terrible news. This news was that a climber had been seen taking a ground fall from high up on Hermes. We all gathered a little gear and prepared to help as best we could.
The track from the lunch spot to the bottom of Hermes is fairly definite – but there are a couple of points where people need to do some scrambling. It would be hard to take a stretcher up these scramble points. We got to the guy without difficulty. He was breathing heavily and at the time we thought he was making articulate sounds. But clearly he had large number of broken bones. He was clearly in a very bad way.
After about a quarter of hour, his breathing suddenly stopped completely. We tried to give heart resuscitation. But this wasn’t much good because most of his ribs were broken. After about 10 minutes of doing this and checking his pulse and breathing, we assumed he was properly dead. There was nothing now for us to do.
Fairly soon news arrived that a helicopter would soon be on its way. So we just had to sit and wait. But it took a couple of hours for the helicopter to come.
When the para-medics looked at him they said quite definitely that he wouldn’t have known what had happened to him. But we, who had been listening to him, thought he could have been articulate. But this is difficult to say. When I had my accident, some people said I was articulate soon after my fall. But my memory is that I knew nothing at all until I was being put in the helicopter. So perhaps appearing to be articulate does not mean very much.

Later we learnt that the guy had broken up with his girl-friend about a month ago. So his solo-climbing could well have been associated with a suicidal condition. Clearly it is better that people do not indulge in solo climbing when they are in this type of condition. There was then a lot of talk about trying to ban this kind of behaviour in climbing.
But such bans would be impossible to enforce. All people are likely to have a slight suicidal tendency when an important relationship breaks up. So, when my marriage broke up, I found I was very happy to use a light motorbike to go to work for a year. But after a year, I decided that this form of transport was insanely unsafe. So I stopped using a motorbike and a bought a car instead. So for a year I probably had a very mild form of a suicidal condition.
I think we all need to accept that sometimes during our lives we are all likely to get a bit suicidal. This is the very nature of life. When we think someone could be in this condition then we must show this person compassion (but we must hide this compassion very carefully). This we means we must tell this person that we have been in this condition ourselves at a point in our lives. But in time we got over it. The best solution is for the person to think of something new to do in their lives. But you can’t tell the guy that they can’t commit suicide. To tell a person that they can’t commit suicide is simply a lie. All people can commit suicide if they really want to. We just can’t stop them.
So all climbers must still be able to solo climbs, if they are determined to do so. And sometimes we must accept that solo-climbers will get killed and we must carry their bodies off our cliffs. This is a condition that all climbers ought to accept. This is an experience, which some climbers might have to endure. There is nothing wrong with a bit of suffering of this kind.

My next normal webpage is “Climbing Days at Lindfield“.