I only started rock-climbing when I went to university at the age of 18. But previous to this I had done a lot of tree-climbing. Also I had done a lot of scrambling up mountains with the scouts. So, when I heard that rock-climbers almost only did established rock-climbs as described in guide-books, I was horrified. I though that this approach was quite unsporting. Surely all people should work out their own routes, when tacking a new rock-face. The true challenge for all rock-climbers should always be to work out their own route – besides the simple task of doing all the necessary moves.
But, when I actually started rock-climbing, I rapidly changed my ideas completely on these ideas. I love the social nature of climbing, where people talk in depth about the various problems they had about doing a particular route. In fact I almost always make a point of just doing the common standard routes simply so that I can talk about these climbs with other climbers. And in general I have avoided putting up new routes myself – unless there is a specific reason for doing so. So my name does not appear in guide-books very often. 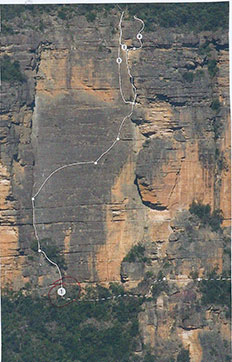 This is the route from the current guide-book. 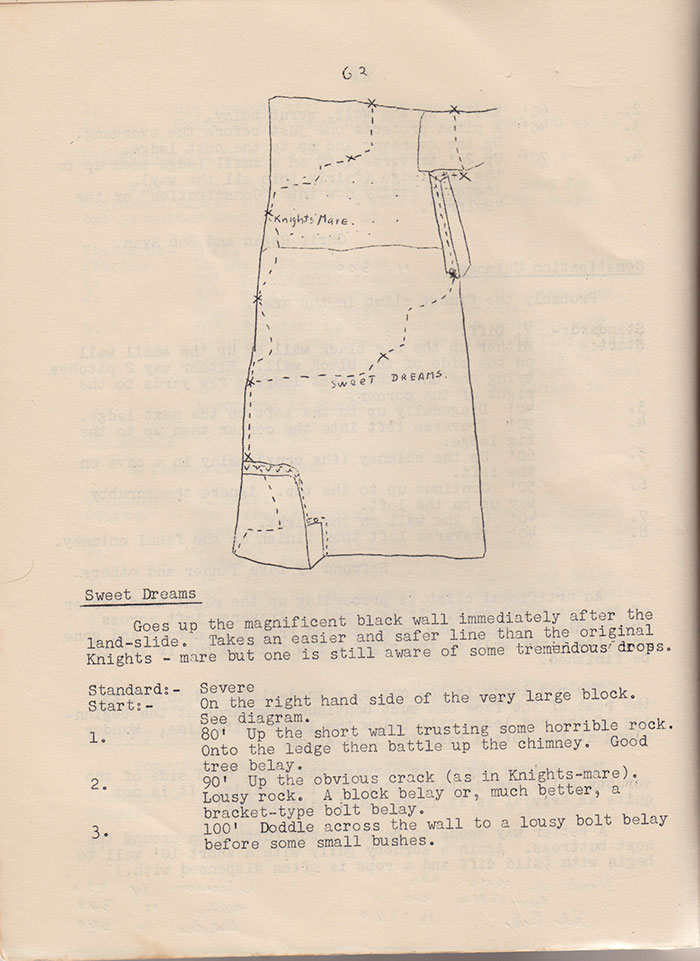 So, on the day Ted and I put up “Sweet Dreams”, we had intended to simply do the second ascent of “Nights-Mare” (the climb had only been put up the week before). But, as soon as I saw the beautiful wall, where Sweet Dreams goes up, I knew we had to give this face a go. This face just looked terrific.
But I also believed that a route should take the easiest line. So, in the route I took, the traverse line is at a slightly lower level and then the route does up slightly further to the right. But this route is nothing like as good as the current route. If you study the differences between the photo in the current guide – to my old diagram in my original guide, then you will be able to see the differences between the routes. And should you actually climb the line I originally put up, then you will probably find the original “bash-in” bolts I put in 51 years ago.

This is the description from my original guide.

In my original guide I put in the comment “Look back in conceit at having so easily crossed that terrifying looking wall”. This was my feeling about the climb at the time.
This route was done on 21/7/63. We called the climb “Sweet Dreams” simply as a contrast the “Knights-Mare” name, which had been put up just the week before.

My next normal webpage is “My Exploits in the Warrumbungles”.