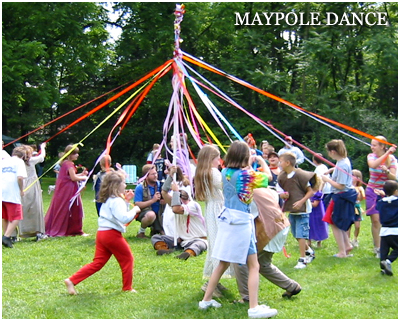 I have had a hate/love relationship with dancing during most of my life. Let me explain.
At primary school I thought dancing was “sissy”. So I didn’t join in. But at one stage my school (Telopea Park, Canberra) organised a Maypole dance for a school open day. I was very intrigued and rather envious of all the children who did join in. I never forgot this incident.
At secondary school (Hendon County School, London) my Mum thought that Clabon and I should learn to dance. So we were packed off to a dancing teacher to receive six lessons. These lessons were absolutely useless. We mainly learnt the waltz. We learnt this complicated step, which involves taking six complex steps to do half a turn. In normal life no one does this step. At the few dances, which our school and scouts organised, I had to forget all about this teaching. But, when I got attuned to what most people do, then I quite liked this general activity.
Towards the end of the 1950s, rock-and-roll became the rage. And many of the young people I knew became brilliantly good at doing rock-and-roll. I tried to learn the dance at a few parties I attended – but I was hopeless. All these young people told me how easy the dance was. But, as I now realise, these young people had been practising the dance for ages with partners with whom they had worked out special routines. In dancing, all people need to have sensible lessons and then to learn to do dances in easy stages from easy dances to hard dances. After this experience, I felt I just couldn’t dance.
So I gave up on dancing.

When I was 28, Noela and I returned to Sydney, and then we bought a house and settled down with our two children. Then the deal was that my time-off was mainly to go climbing for some part of the weekend. But also I had Wednesday night off to socialize in town. I used this night-off well. First I drank with my work friends and the punch girls in the local pub. And then I later went to either a Sydney Rockies meeting or Kameruka meeting. But I still had an hour to spare between these two activities.
I found out that the YHA ran a folkdance at IOOF building (which is close to Caltex where I worked) at this precise time. I felt that fate was telling I ought to go. And I always obey fate.
I was still quite slow in learning these various dances. However, when I finally knew the dances well and I understand how the dances fitted the notes and bars of the music, then I really enjoyed it. After a month or two I started to love dancing. It was terrific. 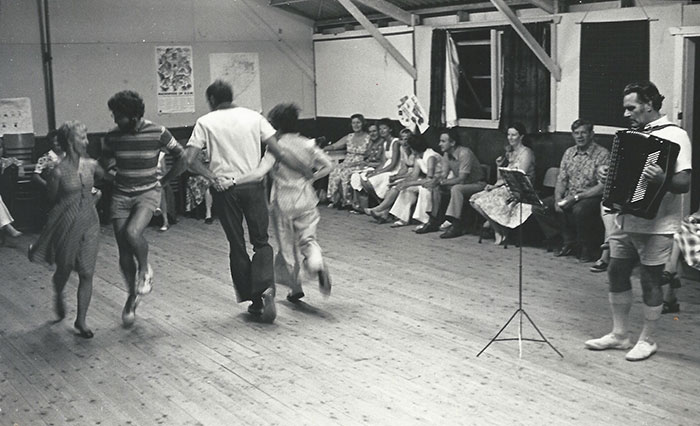 I’m afraid that this is the only social dancing photo that I now possess. This group is bascically the same group that orginally danced at the YHA. But photo this is taken several years later in Sutherland.

Noela was naturally a good dancer. So we went to Sydney University on Friday nights to do International folk dances there. (This group was later to be called Sedenka.) This was the beginning of general folk movement which was to blossom over the next 20 years. So I was fortunate to be there at the beginning. Also there was a local Scottish group, which I could walk to on Thursday nights. So I went to this as well some times. Also there were a few festivals down at Bundeena, which the whole family could go to for the whole weekend. So we all became heavily involved.

In 1975 Noela and I unfortunately split up. For the next 15 years I became heavily involved in many folk activities – and I climbed much less.

Besides the groups I have already mentioned, I joined several Morris teams and started a group myself (Blackwattle Morris). The following photos show some of these activities. I Morris dance is basically a mock-fighting dance as so is can be quite dramatic. 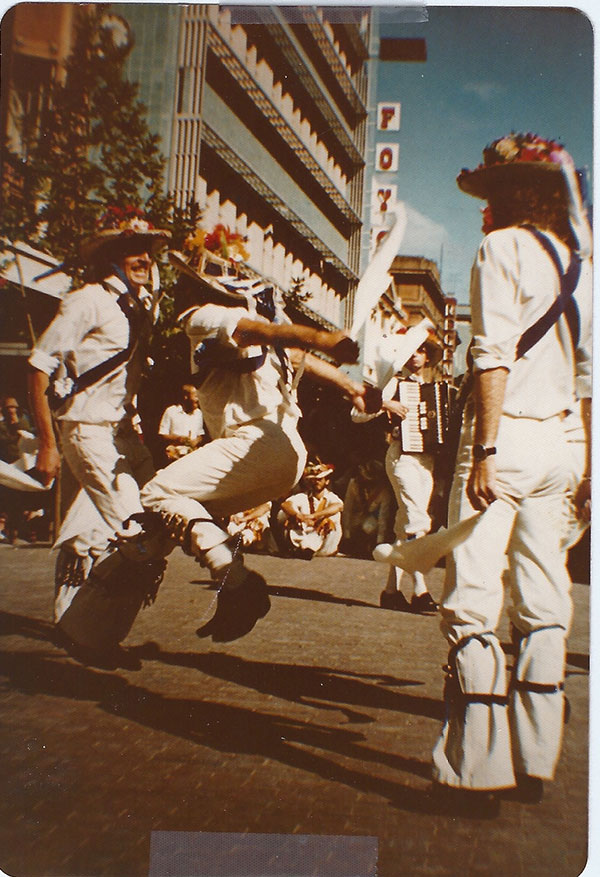 Here I am dancing with the Sydney Morris team. I am the person jumping. 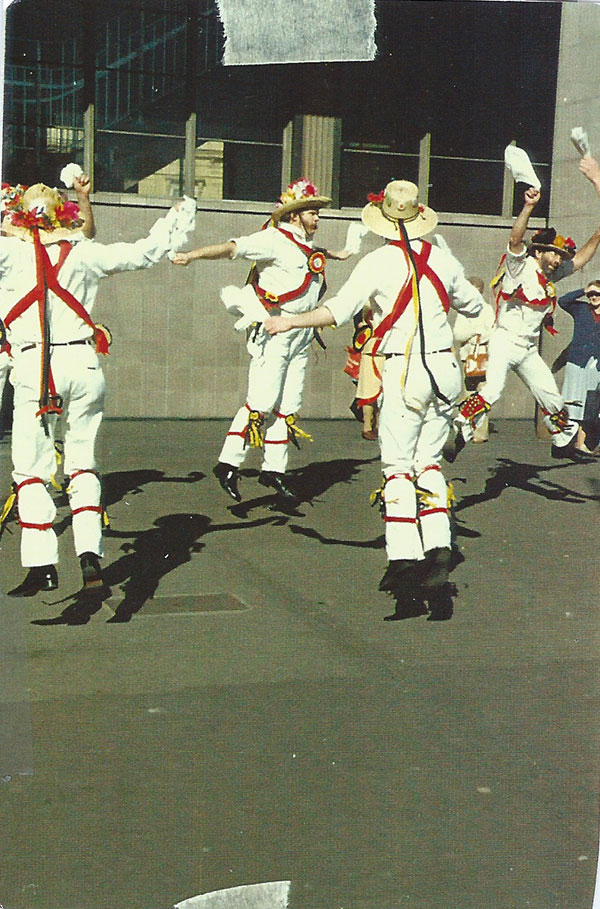 The following photos are of the Blatck-wattle Morris team, which is the team that I started. 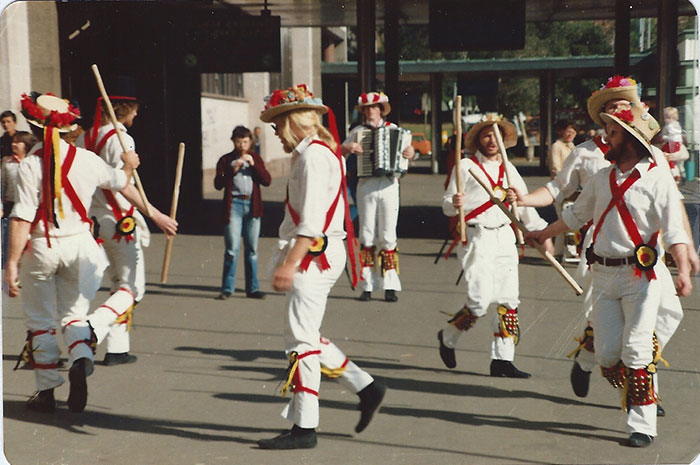 This is a stick dance. 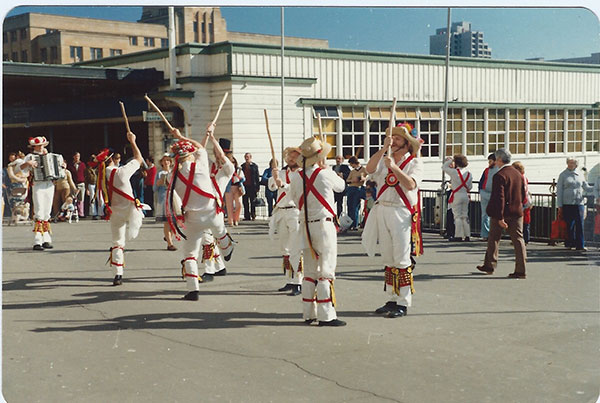 The sticks are used in mock fights. When we clash hard, the sticks often get broken. I supplied new stick from various gum trees near our climbing areas. 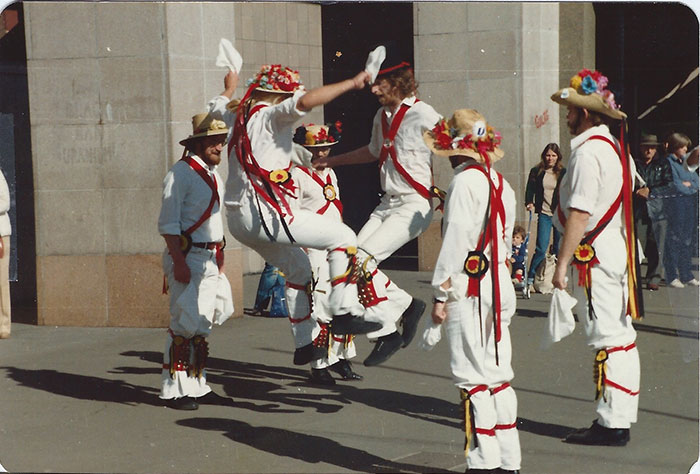 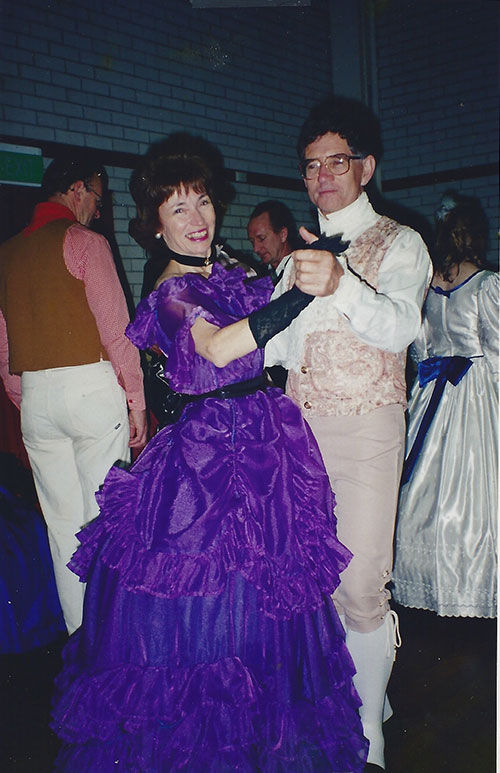 Me and Judy dancing together at a ball. Judy is one of my very oldest friends.

I was also very active in a Playford (old English) Club, a Bush-dancing group, an Irish group, a Contra (USA) group, and several Colonial dance-groups. 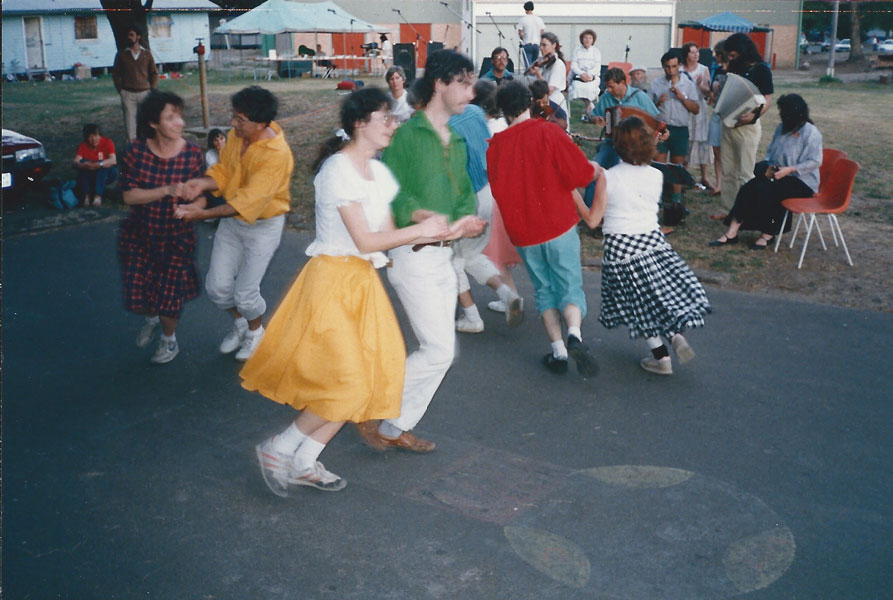 Here we are doing the running set at a Bush Music club festival.

Finally I formed a group, which was devoted to learning “The Running Set” (a dance that takes an hour to perform). Over a period from 1981 to 1993 we performed this dance at three different National Folk Festivals, once at Darling Harbour and several times at various Bush-music festivals. Please click on this webpage to learn more about this quite remarkable dance.

My next normal webpage is “The Running Set”.