I prefer climbing to bush-walking – mostly because it involves less suffering. But I like to go bushwalking occasionally. So I always like to do some walking.
But in Australia there is another reason. In the UK most clubs are called mountaineering clubs. And these clubs include climbing and walking activities. And they are bigger clubs with more girls. In Australia then there wasn’t enough girls in the climbing clubs (there certainly is now if you include all the gyms). So one had to go walking to meet enough girls. So I certainly did.
I joined the Kameruka Bushwalking Club 1962, soon after returning to Australia. This club was then the most active and boisterous club around. They ran some bold and hard trips i.e. first descents of canyons. To gain a bit of status and impress the girls I had to join in some of these hard trips.

Over my fairly long life, I have been involved in many hundreds of bushwalks. (To be precise, over my active years in Australia of 33years, I have averaged about 3 over-night bushwalks per year and about 3 full-day bushwalks. So this gives 200 substantial bush walks over my life.) But I have very few photographs of such trips to show you. So, as there needs to be a photograph for any walk, I can’t rave on too long about the bushwalks I have done. 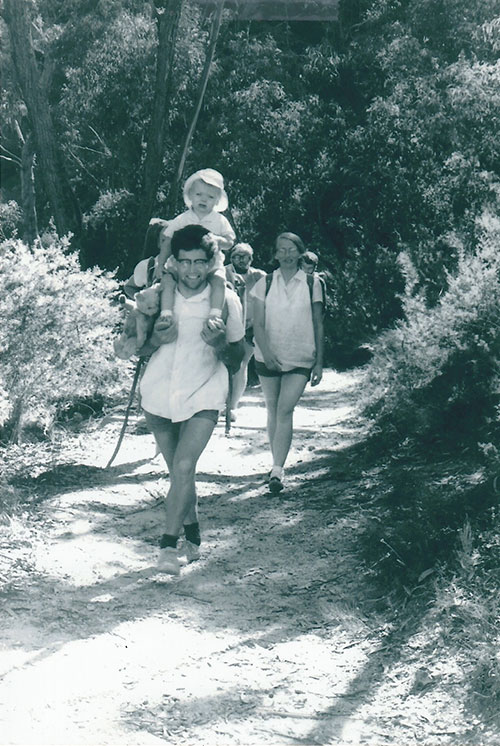 This photo shows me walking with Noela. Tim is on my back. 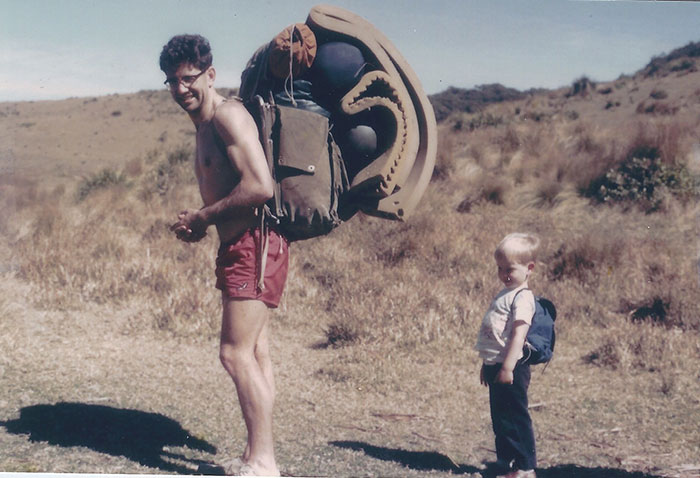 This is a picture of me and Tim, when we were doing some of the Royal National Park coast walk. 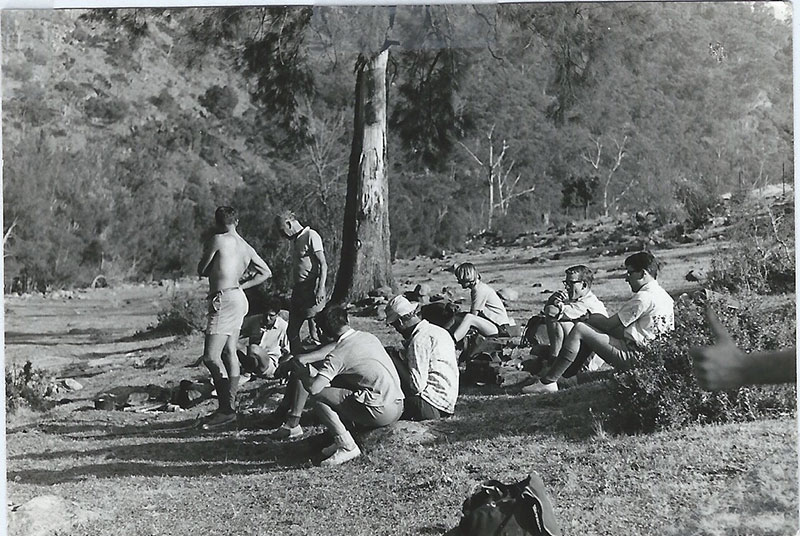 This is a trip Noela and I did with KBC immediately after returning from doing Balls Pyramid. Noela and I are at the back.
For some strange reason, our ascent of Balls Pyramid was a forbidden topic on this trip. 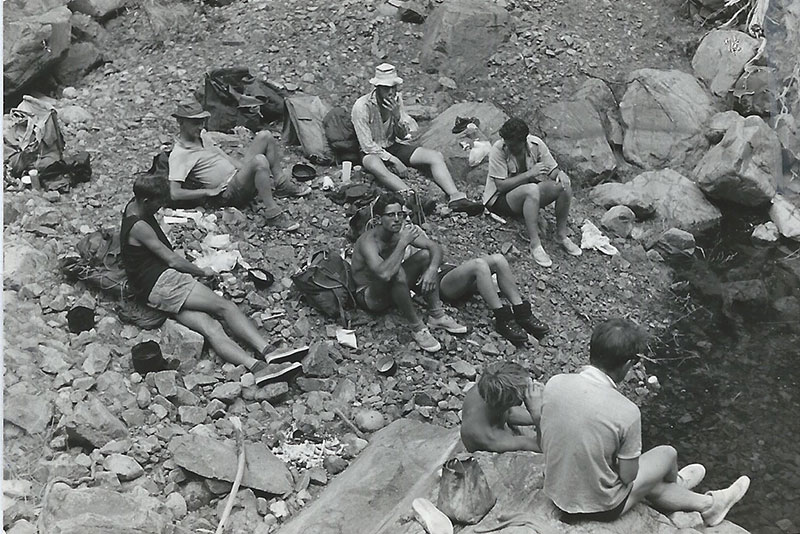 In this photo, Noela and I are in the middle. Then surrounding us, from the left, are Barry Dunnet, Ted Hartley, Bruce Vote, Phil Butt, Steve Sessions and Barry Higgins (I think). 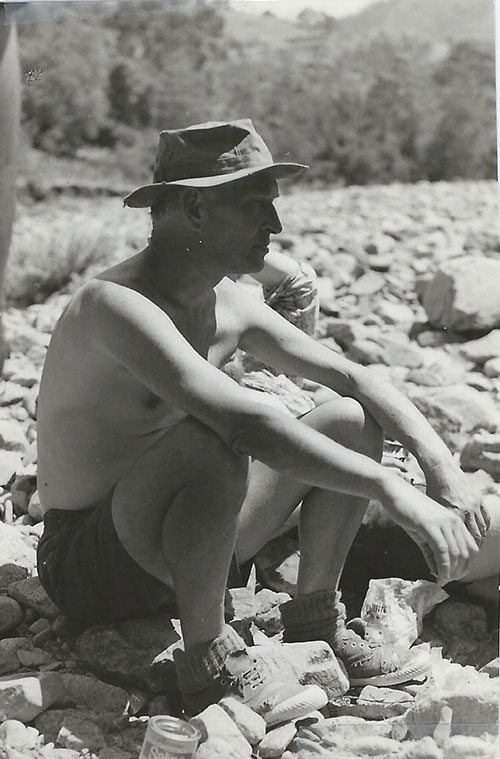 Ted Hartley himself (better known as as the Old Bush Bum) 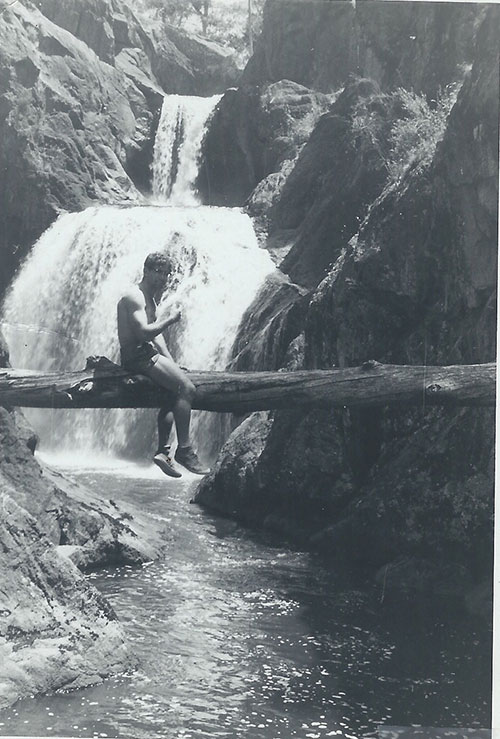 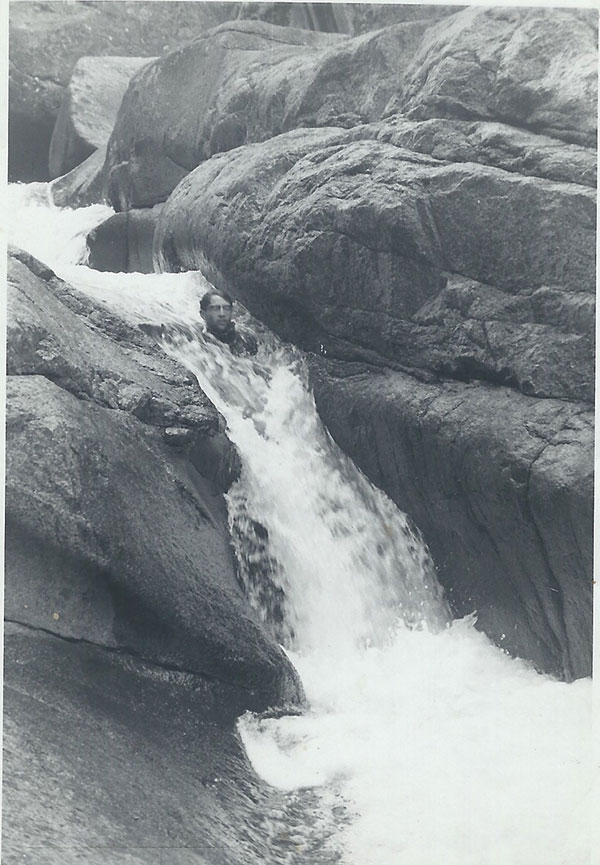 In these photos I’m afraid I’m just “showing off”.
(on a trip going down the Kowmung) 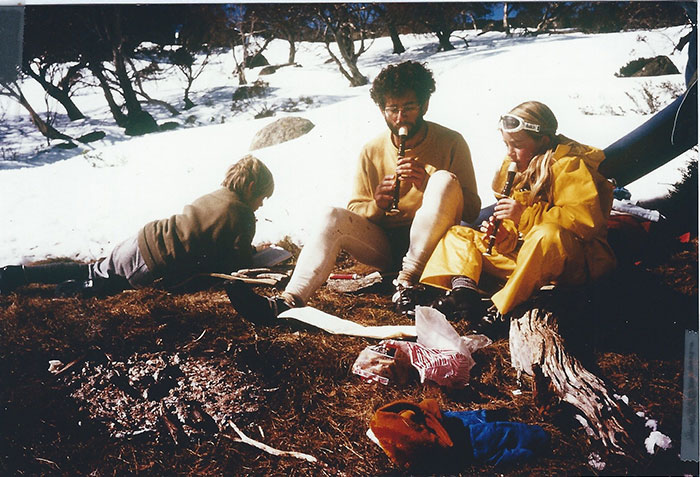 These two photographs show me, Noela, Tim and Naomi camping in the snow on the main range of Kosciusko. We did this for a week for 3 different years.

Noela mostly went ski-ing. I mostly looked after the children. 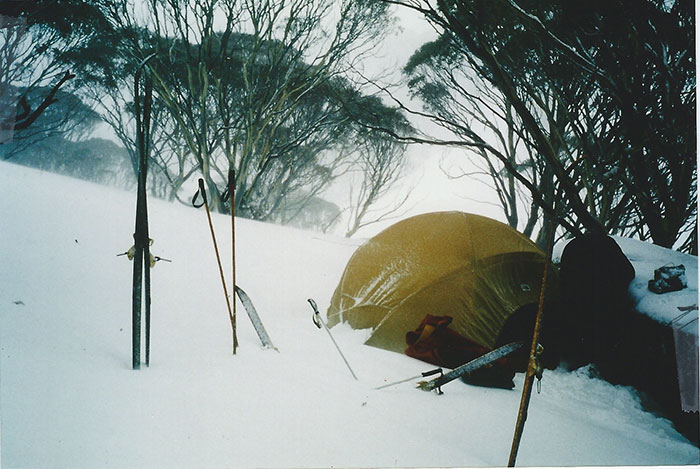 The last time we were caught in a blizzard for 4 days, without any cooked food (a new stove, which I had just bought, blew-up). Noela still wanted to get some ski-ing in. But I together with the children finally out-voted her on this occasion. So we went home.

The following three pictures show a party of us going down Claustral Canyon. This was the third descent of this magnificent canyon. 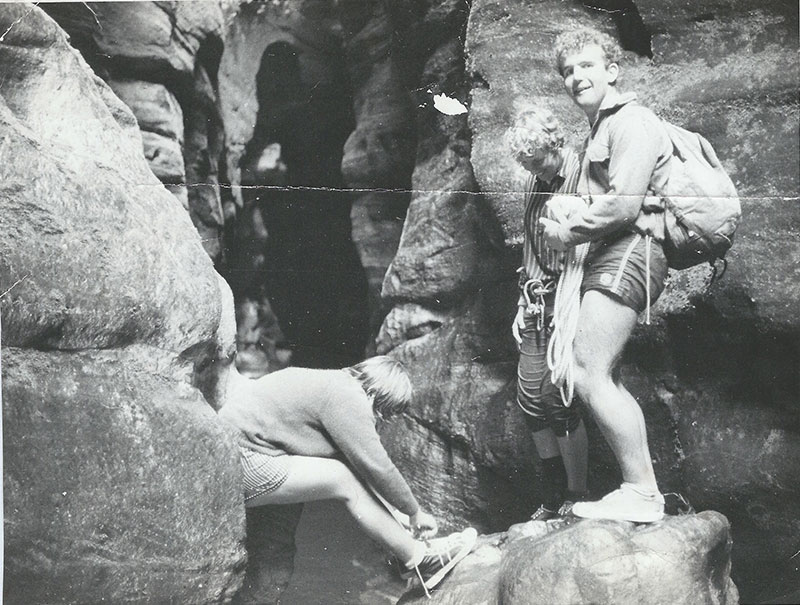 This photo shows Rona Butler, Wendy Butler and Art Vervoen about to abseil into the dark abyss below. 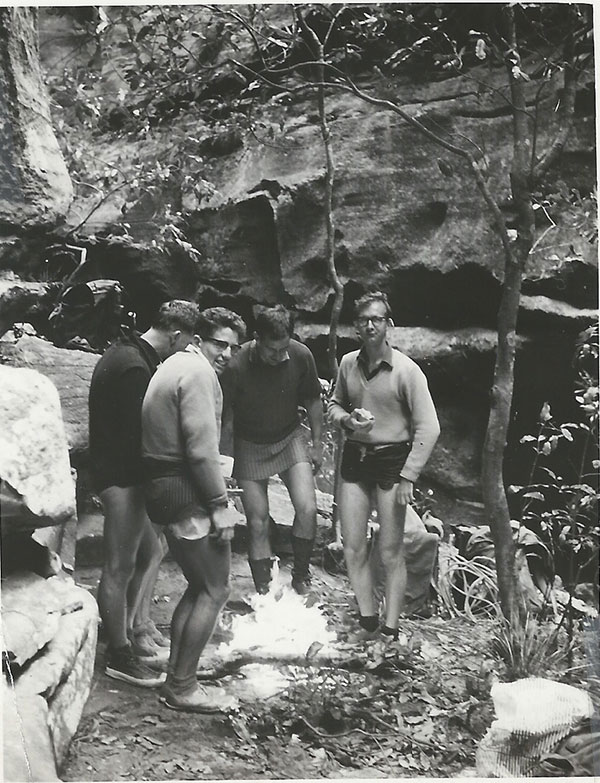 A group of us warming ourselves around a fire. 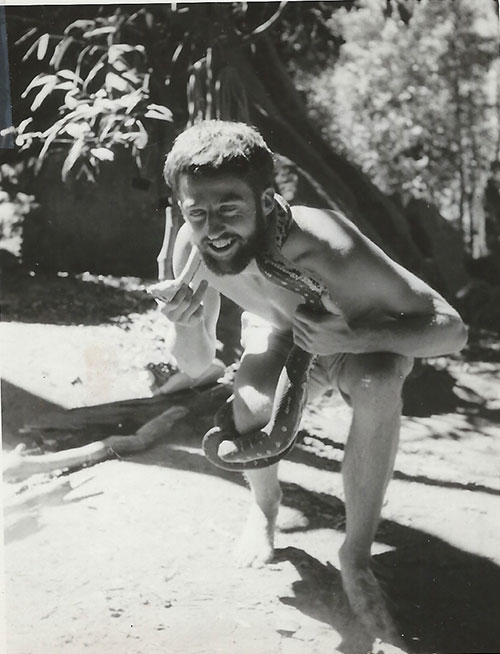 Jack Pettigrew with a snake, which he had just caught in the canyon. 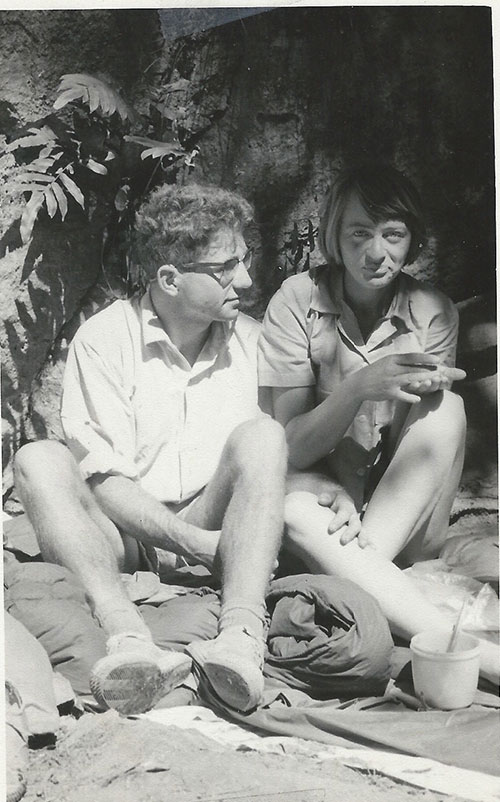 This photo shows me and Noela in the cave in the canyon where we spent the night. 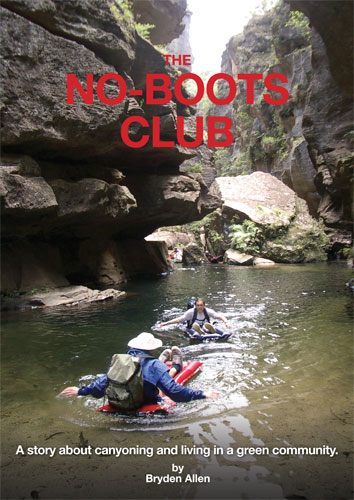 After a year or two I became very attached to the Wallangambe canyon. So I would go down the canyon every year. And I would always organise a party to go with me. Eventually I got quite well organized at this task and so I produced a little blurb telling everyone, who came, what they should take with them and what they should expect.
And then, because I knew the canyon so well, I wrote one of my novels about this canyon (in the first three chapters). And the later chapters are all based on this initial adventure. This novel is in this website.
But you mustn’t expect too much of this novel. The heroine of this story is based on Gwen Moffat who was the major early female climber in Britain (a bit like our Dot Butler in NSW). But in my world, no one can become a hero without upsettings some people in this world. Several women who have read a little of this story, take a strong aversion to my heroine. So – beware. 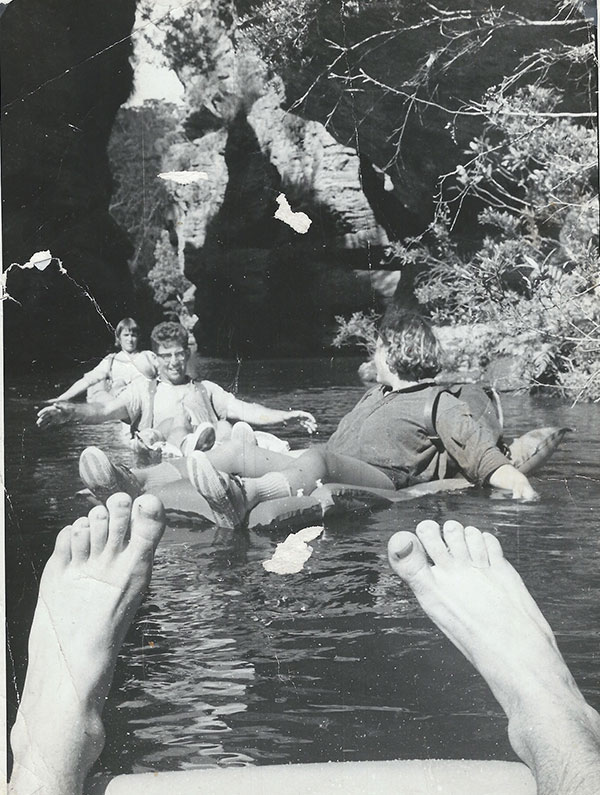 This photo shows Rona, me, Wendy and Jack’s feet.

Wallangambe Canyon – again just a few months after it was first discovered. Likewise this was probably the third descent.

In the following photographs I show some of the many people I have organized to come down this canyon with me. 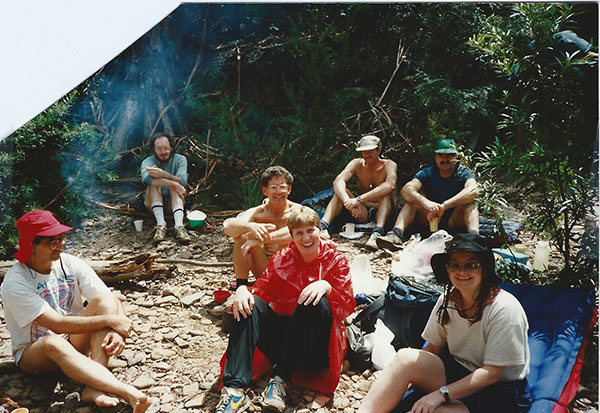 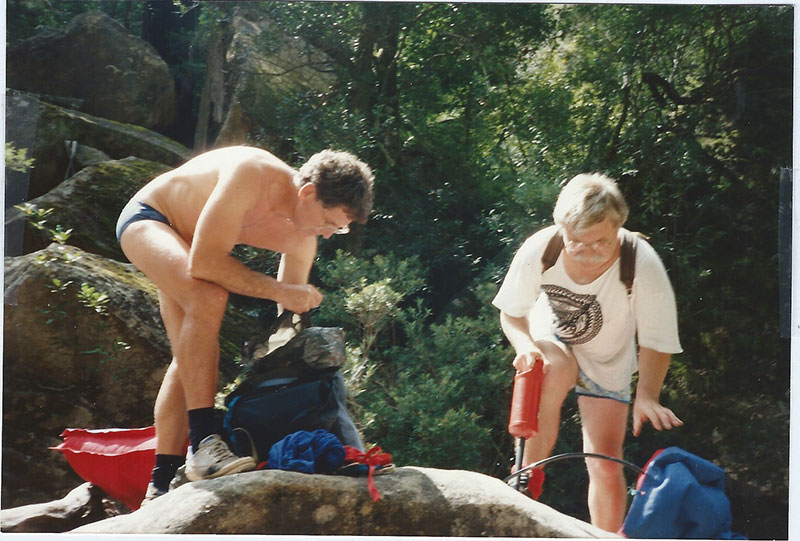 These two photographs show some people from the folk scene who I persuaded to come down. 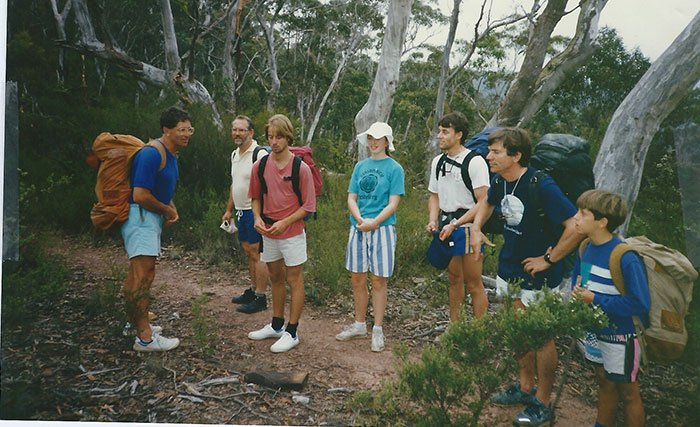 This is a family group.

This is on the walk in before we get to the canyon. 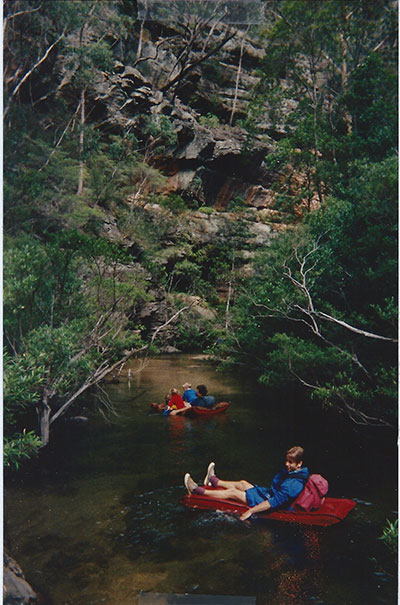 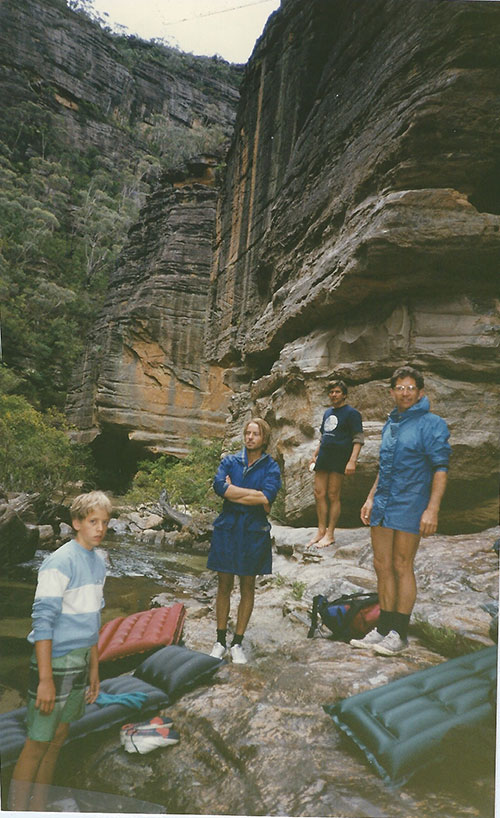 The first photo shows some of the canyon. The second photo shows the place where we stop (before we walk out).

The other trip I have done many times is the Bundeena to Otford coast walk (probably about 20 times). I think Sydney is incredibly lucky to have this wonderful walk, which can be done without any need for private transport. The walk can be done in a day but it is more relaxing to take two days over the walk. Again I have written a blurb for this walk and I have taken many parties down the track. It is a wonderful walk.
These are the very few photos I have of the walk. 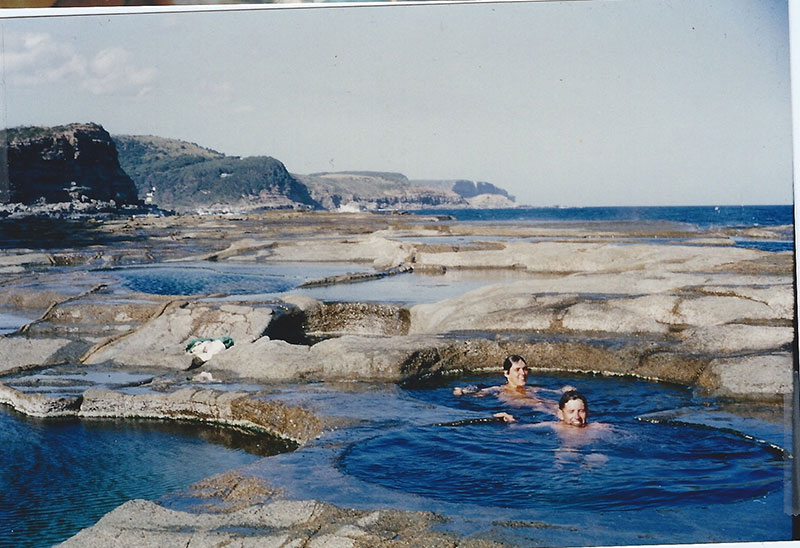 This is the famous figure of 8 pool (Rona and I are in the pool and Jack is taking the photo). You can include this pool in the coast walk because there is an easy way to scramble up the cliff a few hundred meters after the pool. (You can see the wonderful cliff line walk in the background.) 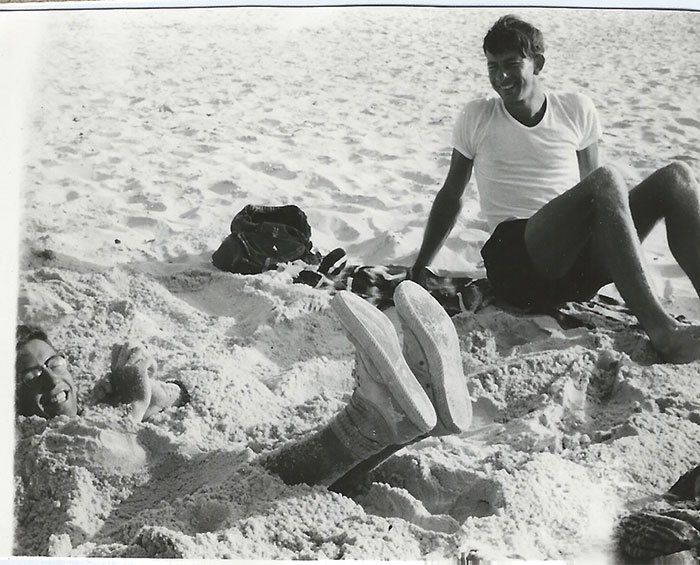 Barry Dunnet and me playing in the sand at North Era. A few minutes after this photo was taken, the news came from someone that Jack Kennedy had been assassinated. 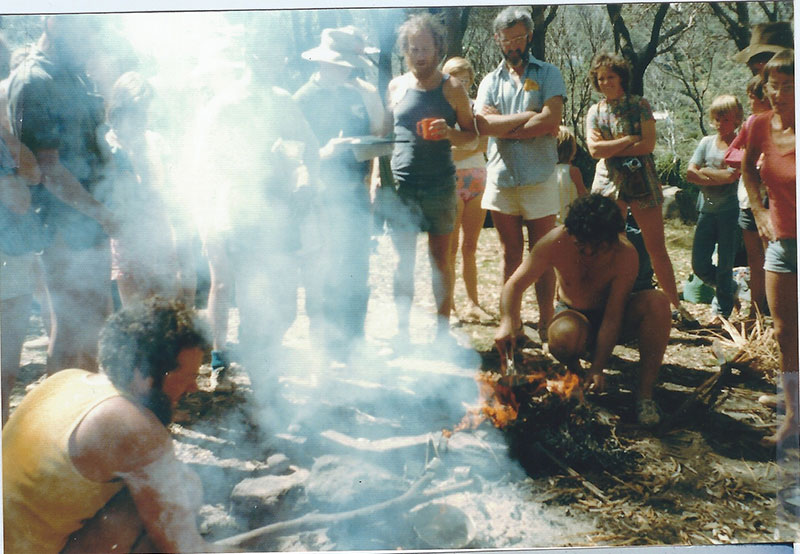 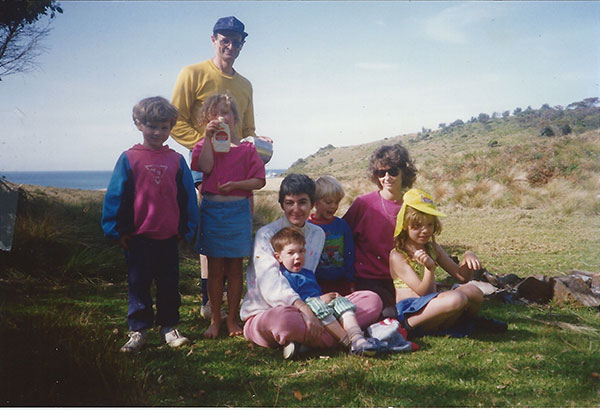 Another scene at the standard North Era camping area (Peter and family, Rebecca and David, as well as other friends)

These last two photos come from a climbing/bush-walking holiday I organized at Mt Buffalo. 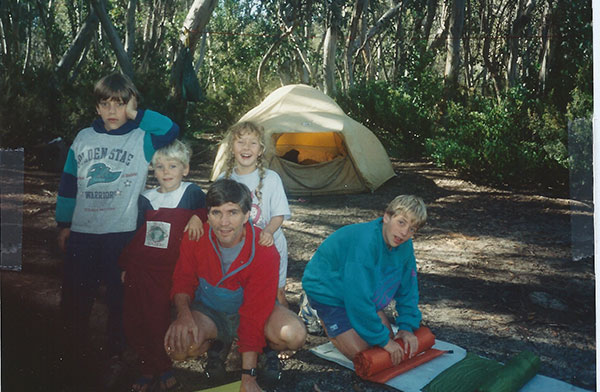 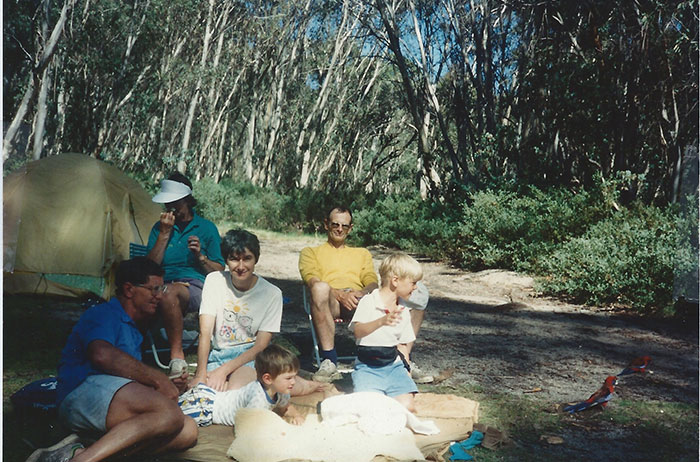 My next normal webpage is “Sports, Games and Running”.