I personally doesn’t think that “terrorism” is a real threat to mankind. But the other items certainly are.

As the cartoon on the right shows, there are many different views of the various problems, which we now face. The problems shown in this picture are a reasonable set to mention. The problems I mention below are not quite the same as these. But I am a scientist and I like to be able to quote clear-cut evidence that can be measured. But this doesn’t matter too much. Mostly we can all agree that we really do have quite a few problems that we ought to be trying to solve. 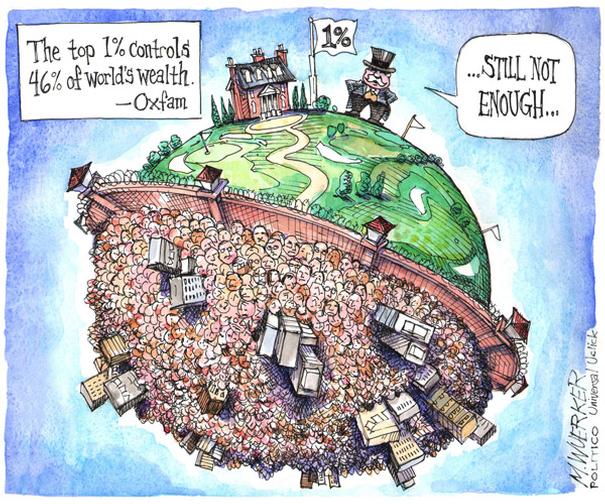 This is a wonderful cartoon.

The cartoon on the right shows this inequality in a far more dramatic way than I could do via words. In my webpage: “Our five Serious Current Problems” I describe the data that demonstrates that this is a very serious growing problem. But you probably already know these facts.

The following three problems can also be shown to be growing serious problems.
2)        The Growing Inequality between the Young and the Old Generations
3)        Less Spare-Time
4)        Our Degree of Global Dependence
These are described in the same webpage: “Our five Serious Current Problems”. As you probbly already know, these are problems are only growing very slowly. So it is very easy to forget all about them them. 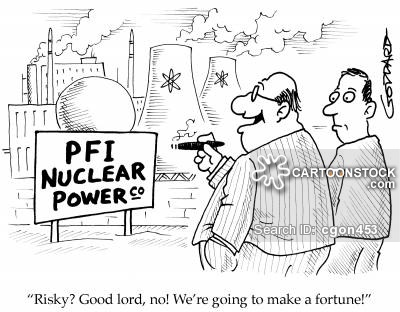 What is risky to mankind as a whole is not necessarily risky to some older rich people.

5)        Pollution
Our various kinds of pollution are all continuing to increase over the world. And most of these pollutions can be accurately measured. Our emitted CO2 pollution, of course, is our major problem. But also our over-fishing is destroying our fish populations in all our oceans. Our excessive desire for coal, oil and gas is polluting the lands close to these areas. Our over-use of fertilizers is polluting our rivers. And our worst pollution is caused by human expansion into our remaining wild lands. Our world doesn’t seem to be capable of controlling these various forms of pollution at all. 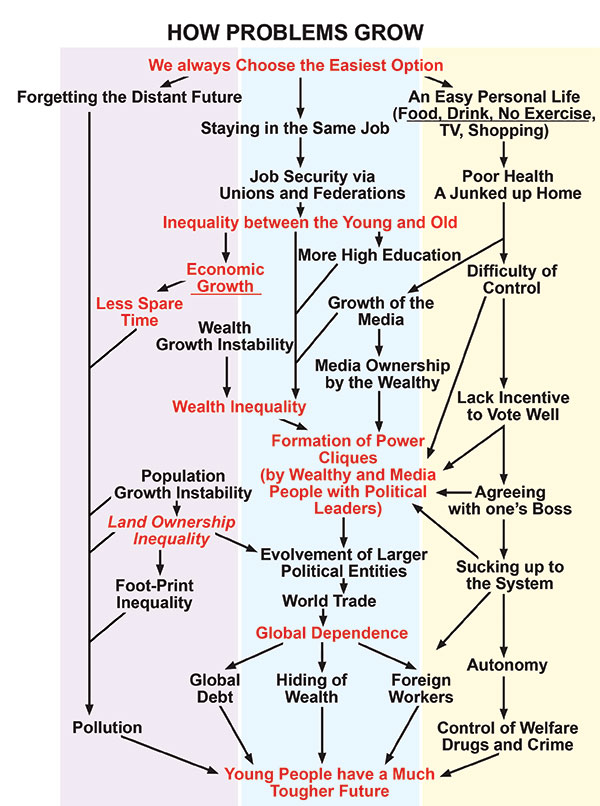 This is a complex subject.

In the diagram on the right I show how and why all these problems will continue to grow. This is described in detail in my webpage: “How Our Problems Evolve and get Worse”. But I must admit that this webpage is horribly long.

But the truly terrible feature of these problems is that we, as a good democratic society, seem to be quite incapable of solving them. The reason is simple. They are all serious problems and to solve them some people’s employment must be changed. Also the wealth of the various rich leaders of our society will also be threatened. In general, majority of people will always vote against any significant changes to the way we currently live. So all significant changes to the way we live are always rejected by the majority of people. This is discussed in more detail in my webpage: “The Difficulty of Reforming a Society”.

This is the evidence we see if we look back over history in general. A nation will only change its ways if it is truly threatened by an invasion. Thus, over the past two hundred years, we have only changed our ways significantly during and after the Napoleonic Wars and the Second World War. People will only change their ways if they are simply forced to do so. So this is a bit of a problem.

But even this problem can be solved – as I will describe later in my webpage: “There_are_Two_Very_Different_Solutions“.

My next normal webpage is: “Self-Sufficiency_or_Globalism“.