After a few dubious failures in my early academic career, I ended up with a good first class honours in Mathematics. Then in my PhD work at Sydney University I was also very successful. My thesis was called “The Direct Numerical Solution of the Calculus of Variations Problem”. From this I had three papers accepted for publication in the Computer Journal in the UK (the main established journal there). My PhD was fairly automatic. So up to this stage I was doing very well. The first page of one of these papers is shown here.

This paper demonstrates that I am a good competent mathematician. So, in this paper, I take a well known result and generalise the solution to the fully general form.

My first job was at Culham Laboratory (close to Oxford) where I was research associate. Here I was the main person solving the various Laplace and Poisson 2-dimensional equations associated with the plasma confinement (the major purpose of this establishment in trying to obtain nuclear fusion). In doing this, I did two things that seem to be unique.
1)          I developed a system of defining complex boundaries in two or three dimensions by carefully using the minimum and maximum functions over the region (equivalent of a logical “AND” and a logical “OR”). These functions gave a positive value in the active region and negative value outside the region. The equations associated with these functions could also be scaled so that they gave an estimate for the distance from the boundary (which is useful when working out the various difference equations). I wrote this work up as a “COS” report – so with luck the paper can still be obtained. This is a very simple technique – but very useful.
2)          If the region has N evaluation points on both sides then it normally takes N4 computer operations to solve the difference equations directly. I managed to devise and use a method that only took about 20xN3 operations. So if N is large then my method is much better. My method works by successively dividing the total area in half. So my method is rather complex. I don’t think it will ever be used again. I gave a couple of lecturers on this method, but I never wrote it up.

My next employment was with Caltex Oil and this is described in my “A Better Method to Solve Problems – with computers”.

At Macquarie University I had two major projects. The first was:

During my time at Caltex Oil (from 1968 – 1974) I was mostly concerned with scheduling problems (i.e. scheduling trucks, rail-tank cars and pipelines etc). Working out the various methods by which this could be done on a computer and then implementing this was great fun (but not easy). However the really hard task was to try to integrate your computer system with how the scheduling clerks carried out the tasks at present (and in fact these clerks usually did a very good job). If a computer system simply worked by itself then the scheduling clerks would loose interest in the job and all their expertise would be lost altogether. What was essential in these circumcises was for the scheduling clerk to be able to see exactly how the computer problem did the calculations that resulted in the optimum schedule. This would then allow the scheduling clerks to understand precisely what was being done and then possibly for them to change the system slightly to give a better schedule.

From this idea was born my first major project – namely to devise a computer language system which would be based on a relatively simple programming language. Then, when a program in this language was being run, it would be at all times fully defined with an understandable simple “instantaneous descriptions”. This means that one could slow down or stop the program running at any point in time, see at what point they are up to in the program and then understand all the data associated with the program at that point in time (and then see how this data changes as the program is slowly run further). Thus the program system would no longer be a “black box” (as is the case for most programs in the current world). In the case of my scheduling programs this would mean that, if for example the scheduling clerk felt that a certain vehicle should be scheduled to a different destination, then he would slow the program when, it was dealing with this vehicle, and, at these relevant destinations, see and understand how the computer did the calculation (e.g. what were the computer’s projected inventory values etc). Thus the scheduling clerk could see if his ideas would have given a better result.

No one to date has yet written a computer language system with a defined and understandable “instantaneous description” so this is not an easy task (and in fact I think a lot of a computer professionals prefer the current system where everything remains a ‘black box’). However I felt (and still do) that this is a good challenge (that would be of benefit to the world) and so I spent the next 8 years of my life with this as my main interest (2 years at Caltex as an unofficial interest and then 6 years at Macquarie University as my formal interest). Thus I devised a complete system, implemented it (in a simple form), gave a couple of courses on it and produced a couple of substantial blurbs, which can be obtained from me.
But this interest is now more-or-less forgotten for the following reasons:
a)   it is comparatively rare now that people need to review calculations (as was necessary in these scheduling tasks),
b)   the introduction of “spread- sheet” program systems has taken away some of the need for an “instantaneous description” for a normal programming language.

The second project was:

When I was at Macquarie University, the main lecturing course I gave was on Linear Programming. I have a strong practical streak in me and so I wanted this course to reflect the sort of thing one actually does in industry. Thus as part of the course I gave the students the task of modelling a refinery. However the students complained that they didn’t know how a refinery worked (or in forming the model they were forced to learn stuff they didn’t want to know about). I had to agree with this view – but I still felt that a person cannot learn about the practical aspects of LP unless they tackle a problem of substantial size. Thus I replaced the refinery problem with the problem of “how a society should optimize its activities when neither fossil or nuclear fuels were available”. {A fairly hard problem – the students soon came back to me and said they would prefer to go back to the refinery problem.}
To solve this problem one needs to make simple yet realist approximation to the structure of land and the demography of the human population. In doing this I was essentially doing the first step of my “Society of Choice” project. This is all written up in my write up called “Modelling the agriculture/energy self-sufficiency problem”. (This can be obtained from me – 37 pages.) I give one page of this docement below. 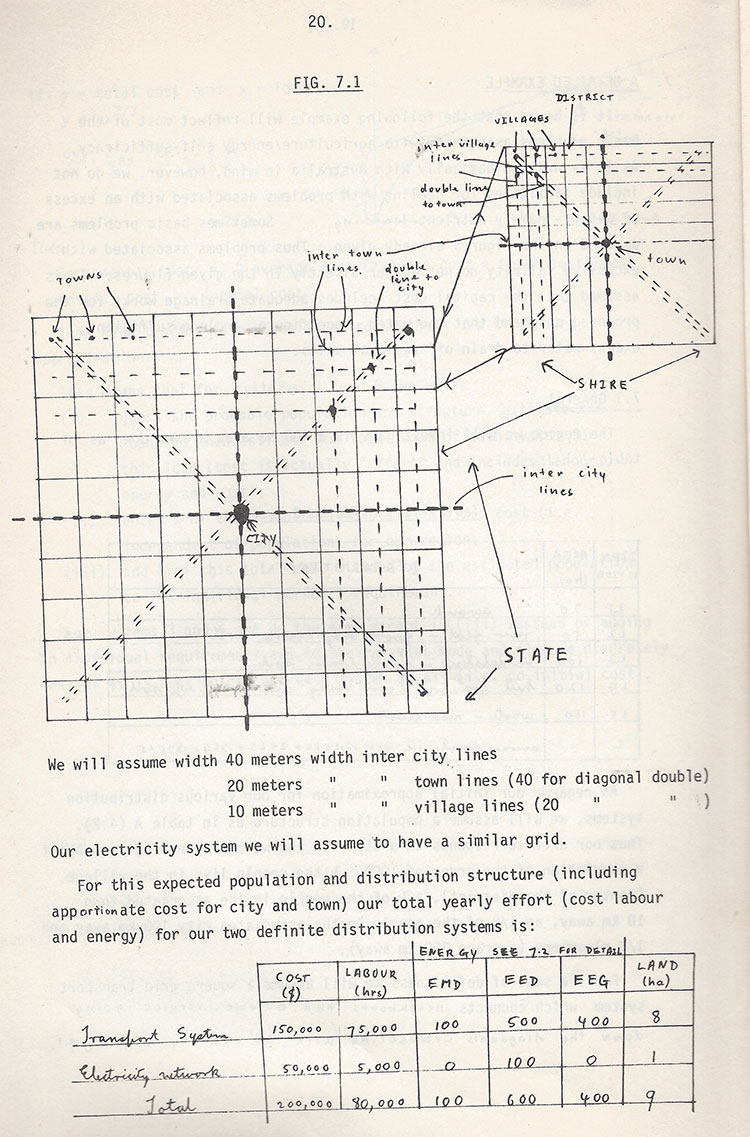 My next major employment was as a research associate in the mathematics department of Sheffield University. This employment was rather similar to my period at Culham Laboratory – except I was solving the equations associated with the formation of auroras in the northern ionosphere. But in my spare time I was also working on my “Society of Choice”.

Then I spent few years at Sydney University back at the Basser Computing Dept. My research interest was mainly on my “Society of Choice”. But also worked on the Chess strategy, which I mention in my “A Better Method to Solve Problems – with computers”.

Finally then I worked in the actuarial department of GIO. A minor job I did here was to produce my own Word-Processor.
At GIO there was a slight desire that our clients (i.e. the users of our suite of superannuation programs) should have a simple word-processor. I took this as a challenge to write one myself – so I did. Writing a word-processor is not the easiest of tasks in any case and particularly for me, as I had had no association with the word-processing side of computing at all. Still it was a fun thing to do. It took me about six months and I didn’t do it in the easiest of ways (I dealt with the text in terms of lines whereas apparently it is better to treat it purely in terms of characters). It was all written in MODULA – a language that no-one now uses. GIO didn’t use it but I used it for the next 8 years and my book on the Society of Choice (350 pages) was written with it. It was awful when my DOS oriented computer eventually gave up the ghost (2002) and I had to finally come to deal with the horrors of Microsoft’s WORD. I wrote a blurb on my system, which can be obtained from me.

I also try to keep abreast with what is going on in the scientific world. The following webpage explains some of my thinking on this subject “Where is all the Dark Matter”.

My next normal webpage is “Scouting”.