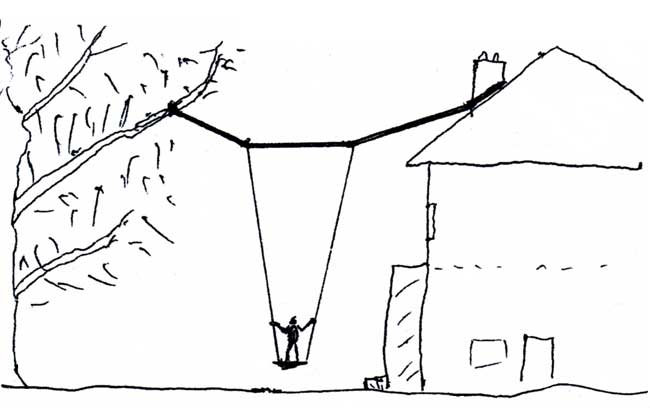 The general idea of this invention can be see from the diagram (showing fairly precisely how I implemented my idea). What is not so clear is why would I want to make such a swing.
If one wants to make a high swing, then it soon becomes very expensive to build the required support structure. But by using a strong thick rope between two high attachment points one does not need such a structure at all. But let me now tell the history of why I wanted to build a high swing.

The scout troop my Dad belonged to in Western Australia was highly acrobatics oriented. He was personally highly skilled on the horizontal bar. He taught some of the easier movements to me (but not the hard ones – thus at one stage he could do the full straight arm loop around the bar). Related to this, he also had a keen interest in swings – thus he built us kids a swing at our house on Mt Stromlo. He had also been on a special swing in California where they had solid bars instead of ropes and hence a person could do the full circle. A regards swinging Dad taught me my first bit of not obvious physics.
I, like most kids, thought you went up because you sort of ‘pushed yourself up’ when going forwards. He explained to me that a person goes up because a person does extra work by pushing themself up at the bottom of the swing, when a person’s effective gravity is high. So a person goes higher because of the law of conservation of energy. It was definitely true because you can do a double swing (push up on both the forward and backward parts of the swing) and you do indeed move upwards at double speed. However you need a big swing to make this useful and there are very few large swings around (they tend to wipe out small children who are not watching).
This gave me a challenge as to how to build a really high swing. I was well prepared for this challenge because I was already highly skilled at climbing houses and trees. Also I had acquired a reasonable large amount of rope. We had a large oak tree in our back garden and I had already used this as a simple single rope swing for a bit of fun. However as a proper two-rope swing it was hopeless because the lower branches always got in the way. Then I had the finest little idea that I have ever had in my life so far. Our house was 2-storey with a nice solid chimney at the top. I had one very solid rope (I used for hand-over-hand climbing) and fortunately this was just long enough go from the chimney to a correspondingly high large branch in the oak tree. From the middle of this I could suspend a normal swing in the region between our house and the oak tree, which was free of obstacles. The diagram shows the picture.

This gave me a swing with a height of 25 feet, which is very high (a normal swing is usually about 10 feet). I could actually swing to a height of 30 feet by swinging 5 feet above the horizontal and accepting a free fall drop of 10 feet as you fell from your high point to join the normal circular arc 10 feet below. It felt horribly dangerous – probably because it was. I really needed to use the double swing to get myself up quickly. Anyway I thought it was a great feat and it was nice to have Dad around as one of the few people that could appreciate what a feat it was. He didn’t try it seriously himself – at his age it was outside his league. I only left the swing up for 6 months as there was abrasion on the rope around the chimney and this needed constant attention.

In general climbers could use this idea, when they are camped for a few days where there are plenty of large trees (which is fairly frequent e.g. when camped at Arapiles). So a strong rope would be connected between two large trees and a high swing would be suspended from this. It would be a fun activity to engage in.

This can be extended to something much more exiting. Choose two reasonably close high buildings and make a swing between them – perhaps 50m high.

My next normal webpage is “Easy Compact Home Living”.